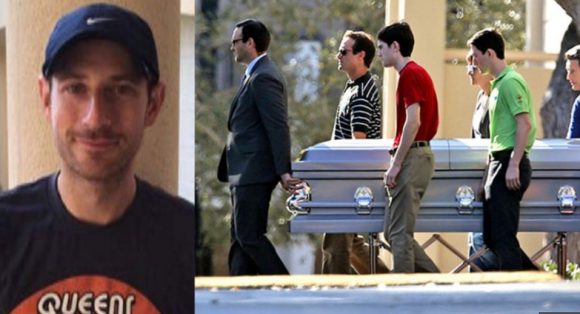 As we continue to mourn the victims of the killings at Marjory Stoneman Douglas High School in Parkland, Florida, teachers are reflecting on what their roles and responsibilities are if a gunman came to their schools.  The New York Times has a featured article (see below) this morning that explores this question with a number of teachers from around the country.   Among the responses was one from Bruce Klasner, 61, of Everglades High School.  As reported:

“I teach the Holocaust,” he shouted at the rows of exhausted teachers. “I taught them,” he said of his students, “about a man by the name of Janusz Korczak who walked into the gas chambers with his children because he refused to leave them. And after this happened my kids are sitting outside saying, ‘Mr. K, would you give your life for me?’”

As we mourn the victims at Parkland, we honor the teachers who gave their lives for their students.

TAMARAC, Fla. — The shooting was all over, but the emotional reckoning had just begun, and so on Saturday the teachers of Broward County packed their union hall to discuss what it meant to have become the nation’s human shields.

“Last night I told my wife I would take a bullet for the kids,” said Robert Parish, a teacher at an elementary school just miles from Marjory Stoneman Douglas High, where a former student killed 17 people, including three staff members who found themselves in the line of fire.

Since the attack last week, said Mr. Parish, “I think about it all the time.”

Across the country, teachers are grappling with how their roles have expanded, from educator and counselor to bodyguard and protector. They wonder if their classrooms are properly equipped, if they would recognize the signs of a dangerous student, and most of all, if they are prepared to jump in front of a bullet.

In the last few days, teachers wrote to Congress, urging bans on assault weapons, and to state lawmakers, seeking permission to carry firearms to school. They attended local protests and reviewed safety plans with students. And in the evenings, they spoke with friends and family about an excruciating reality — that teachers, who once seemed mostly removed from the life-or-death risks faced by the ranks of police officers and firefighters, might now be vulnerable.

“I visualized what it would look like, and it made me sick,” said Catherine Collett, 28, a sixth-grade teacher in Northern Virginia who has spent recent days running through a thousand violent scenarios. “Could I empty out the cabinet and throw out the shelves and put kids in the cabinets? Is my better chance just barricading the doors? Can I move furniture that fast? Do I ask my kids to help me?”

Many teachers said even contemplating such worries felt far from what they had once imagined their challenges would be. As if the mounting pressures of test scores and email messages to parents and bus duty and hall duty and new certifications and all those meetings wasn’t enough. But the death toll has piled up — staff killed in shootings at Columbine High School in Colorado in 1999, Sandy Hook Elementary in 2012 and now at Stoneman Douglas in Florida — and is forcing a shift in how teachers view their responsibilities.

“When I started teaching, I thought I was just coming in to teach,” said José Luis Vilson, 36, a middle school math teacher in New York City. Now he has come to view himself as a first responder, too, and added that instruction on topics such as conflict resolution and first aid would be useful.

Bo Greene, 56, a calculus and statistics teacher in Bar Harbor, Me., said the planning for dangerous situations had increased and grown more specific in the last year, even in her quiet school district. All of it feels jarring after decades in education, she added.

“I never had any of this,” Ms. Greene said. “We had the basic fire drills.”

Nowhere was the conversation among teachers more intense than in Broward County, where Stoneman Douglas is one of more than 300 schools, and Nikolas Cruz, charged in the shooting, had been among the district’s 270,000 students.

Laurel Holland, who was Mr. Cruz’s 11th-grade English teacher, said teachers in big public schools cannot possibly be expected to look into every student’s background to know if they have long been troubled. The year that she taught Mr. Cruz, she had more than 150 students, she said.

“There’s not enough time,” she said.

In the case of Mr. Cruz, she said, it was clear something was wrong. “He didn’t work and play well with others,” she said. “I was frightened.”

Ms. Holland eventually reported him to the administration, and he was removed from her class after one semester.

Inside the crowded union building on Saturday, educators held hands and shouted “Union strong!” before getting down to business.

How, they asked, were they going to stop the next one?

For hours they spoke of the golf clubs and baseball bats they would like to keep in their classrooms, of the bulletproof vests they wish they had, of the challenges of removing mass killers from their midst.

“I’m curious to know, out of the people here, how many Nikolases they have at their school?” said Elizabeth Sundin, 48, a teacher’s assistant. “Because I have one at our school.”

Outside, in the balmy Florida night, Mr. Parish, 51, of Broadview Elementary, was wrestling with the question of the class door. When an armed attacker begins to prowl, and a student is left in the hall, “Do I let the kid in, and maybe the gunman behind her?” he said. “Or do I not let them in and save the whole class? That’s a decision I can’t make.”

Inside, under the glare of fluorescent lights, Bruce Klasner, 61, of Everglades High was wondering why the district had not created a text message system that could send instructions in the event of an attack.

“I teach the Holocaust,” he shouted at the rows of exhausted teachers. “I taught them,” he said of his students, “about a man by the name of Janusz Korczak who walked into the gas chambers with his children because he refused to leave them. And after this happened my kids are sitting outside saying, ‘Mr. K, would you give your life for me?’”

In a corner, Andrea Suarez, 35, of Westpine Middle School was worried about her own students, who have special needs and often make loud noises, meaning it is almost impossible to hide them.

These days, she said her plan for responding to a shooting involves corralling the children into a closet, occupying them with snacks, and positioning herself in front of the closet door with a pair of sharp scissors.

“I’ve been having a lot of difficulty sleeping,” said Ms. Suarez, whose four children have been urging her to leave the profession. “I keep hearing kids screaming and gunshots in my head.”

Here in Tamarac, the union meeting was wrapping up.

Jim Gard, in cargo pants and a union polo, stood outside, amid palm trees. At 58, he has been a teacher for 36 years, he said, and works at Stoneman Douglas. When the shooting broke out, he was in math class, not far from where many were shot. He had taught Mr. Cruz, as well as two of the dead.

“You know, if I go through my college transcripts — master’s degree, doctorate courses, all that — I know for sure there are no courses that say: ‘Shooter on Campus 101,’” he said.

The Broward County school district announced on Monday that staff members would return to Stoneman Douglas at the end of the week. Classes are expected to resume on Tuesday, Feb. 27.

Mr. Gard said many of his colleagues were struggling with the idea of returning.