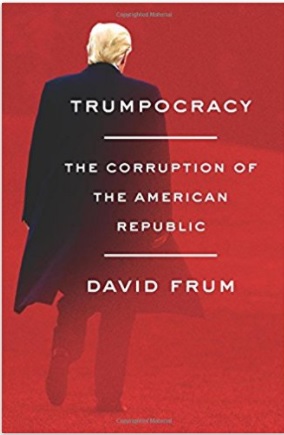 I have just finished reading David Frum’s new book, Trumpocracy:  The Corruption of the American Republic.  Frum is a senior editor at the The Atlantic and a former speechwriter for George W. Bush. He understands the White House and he paints a sad picture of our current president who he says is undermining our most important institutions to the extent that our democracy is at stake.  This book is a careful, well-researched treatment of Trump’s talents and weaknesses.  Frum has almost fifty pages of notes and covers his subject in depth.  It is a far better read than say Michael’s Wolff’s Fire and Fury which teases the reader with lots of gossip but never cites any sources. Here is an excerpt from the New York Times Book Review:

“Frum argues that Trump’s greatest talent — his genius really — is spotting and exploiting weaknesses. The Republican establishment spent $100 million to put the crown on Prince Jeb Bush’s head. Trump incinerated Bush (and all that cash) with his gibe about “low energy.” He then proceeded to incinerate “little” Marco Rubio and “lyin’” Ted Cruz. Trump’s campaign against Hillary Clinton was in some ways a model of how not to run campaigns — he lurched from crisis to crisis and never bothered to enumerate any detailed policies. But he understood her great limitation: that she represented the nexus between meritocracy and plutocracy, indebted to Big Money and divorced from millions of heartland Americans.

Trump’s political operatics worked because he understood deeper weaknesses in American society. The white working class is suffering from two great hammer blows. The first is to its economic well-being: A group that thrived during the golden years of the 1950s and 1960s has seen its incomes stagnate and its job security disappear. Great swaths of white America now suffer from maladies that are all too familiar to black America: broken homes, drug addiction, listlessness, early death. The second hammer blow is to its psychological well-being: Even as their economic position has declined, members of the white working class — particularly white working-class men — have seen themselves denounced, often by people who spend more on college education in one year than they earn shoveling dirt, as agents of privilege and oppression. What better way to respond to being defined as a problem than to vote for a man who promises to punch back?

Trump grasped that America is suffering from an epistemological weakness as well as economic ones: The line between truth and falsehood is becoming dangerously blurred. Again, America’s knowledge elite is partly responsible for this: Armies of postmodern academics had prepared the way for Trump by arguing that truth is a construct of the power elite. But the biggest culprit is technological progress. Digitalization is not only creating a deafening cacophony of voices. It is also making it harder to finance real journalism while simultaneously making it easier to distribute tripe…

…[Trump is] a Manhattan-based playboy who has had life handed to him on a silver platter might look like a strange vehicle for the pain of the American heartland. But Trump is a winner with the soul of a loser: He is consumed by imagined slights to his fragile ego, hypersensitive to the pretensions of smarty-pants liberals, a man who spends many hours a day watching cable news and seething with anger. He is also an anti-intellectual with the soul of a postmodernist: He believes that reality is something that can be bent into any shape you choose provided that you have enough power.

What does Trump want to do with all his power? The answer, Frum argues, certainly does not lie in helping the white working class that put him in the White House. His tax cuts will widen America’s already high levels of inequality. It lies instead in “the aggrandizement of one domineering man and his shamelessly grasping extended family.” The essence of Trumponomics is running a country just as you run your family business: appointing people with whom you have strong personal ties, ideally ties of DNA, directing business to your properties, using public resources to avenge private grudges. Trump’s appointments to the White House staff included his former bodyguard, Keith Schiller, and a former contestant on “The Apprentice.” Perhaps the most telling moment in his first year was when he asked his daughter Ivanka to sit in his seat at a G-7 meeting, thereby reducing a great republic to the level of a family property.

Frum thinks the combination of Trump’s drive for self-aggrandizement and America’s current weaknesses is nothing less than a threat to the democratic order. “The thing to fear from the Trump presidency is not the bold overthrow of the Constitution, but the stealthy paralysis of governance; not the open defiance of law, but an accumulating subversion of norms; not the deployment of state power to intimidate dissidents, but the incitement of private violence to radicalize supporters.” Any supposed solutions to Trump’s behavior, however, may be worse than the disease: American liberals have found themselves investing extraordinary hopes in the generals who now surround the president.

Trump isn’t alone in the weakness-exploitation business. Some of the most eye-catching investors in his real estate empire since he won the Republican nomination hail from countries where there is a faint line between business and politics. And some of Trump’s biggest ideological backers have an almost apocalyptic sense that America needs to be purged in order to be saved. Hanging over everything is the figure of Vladimir Putin, a man who has devoted his career to accumulating information on weaknesses, both personal and political, and turning that information into power. Rather than Russia turning into America, as America’s policymakers argued in that great age of illusion, the 1990s, America seems to be turning into Russia.”

I highly recommend this book for all those who want to understand better how America has gotten to where it is and maybe where it is going.