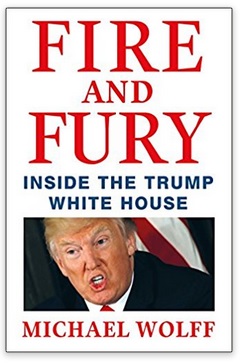 Steve Bannon made incendiary comments about Donald Trump in a new book by Michael Wolff entitled, Fire and Fury: Inside the Trump White House, that is set to be released next week.   As reported by The Guardian yesterday, Bannon suggested that Trump was aware of a meeting his son Donald Trump Jr. had with Russian operatives at Trump Tower in June 2016 and that the then-candidate met with the delegation himself. Bannon also described the meeting as “treasonous” and “bad shit.”

“Even if you thought that this was not treasonous, or unpatriotic, or bad shit, and I happen to think it’s all of that, you should have called the FBI immediately,” Bannon told Wolff, according to The Guardian.

Trump unleashed a furious denial of Bannon’s claims late yesterday saying his former adviser had “lost his mind” and alleging the former campaign chief had “very little to do with our historic victory.”

“Steve Bannon has nothing to do with me or my Presidency,” Trump said in a statement, which also accused Bannon of leaking information to the media. “When he was fired, he not only lost his job, he lost his mind.”

Trump’s lawyers are threatening to sue Bannon for libel and breach of a confidentiality agreement he signed when he became a member of Trump’s campaign.

I think Wolff’s Fire and Fury.. is going to be a best seller!