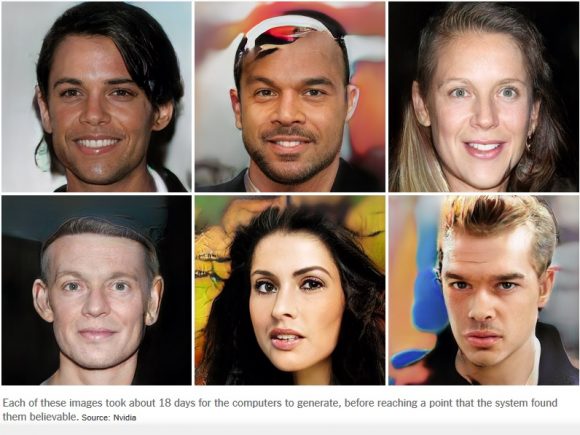 The New York Times has an article reporting on advances being made in using artificial intelligence (A.I.) to create images.  The images above are not photographs but images created entirely by A.I. The article goes on to describe how these advances will make their way into 3-D imaging, games, and holography.  Here is an excerpt.

“At a lab in Finland, a small team of Nvidia researchers recently built a system that can analyze thousands of (real) celebrity snapshots, recognize common patterns, and create new images that look much the same — but are still a little different. The system can also generate realistic images of horses, buses, bicycles, plants and many other common objects.

The project is part of a vast and varied effort to build technology that can automatically generate convincing images — or alter existing images in equally convincing ways. The hope is that this technology can significantly accelerate and improve the creation of computer interfaces, games, movies and other media, eventually allowing software to create realistic imagery in moments rather than the hours — if not days — it can now take human developers.

In recent years, thanks to a breed of algorithm that can learn tasks by analyzing vast amounts of data, companies like Google and Facebook have built systems that can recognize faces and common objects with an accuracy that rivals the human eye. Now, these and other companies, alongside many of the world’s top academic A.I. labs, are using similar methods to both recognize and create.

Nvidia’s images can’t match the resolution of images produced by a top-of-the-line camera, but when viewed on even the largest smartphones, they are sharp, detailed, and, in many cases, remarkably convincing.

Like other prominent A.I. researchers, the Nvidia team believes the techniques that drive this project will continue to improve in the months and years to come, generating significantly larger and more complex images.

“We think we can push this further, generating not just photos but 3-D images that can be used in computer games and films,” said Jaakko Lehtinen, one of the researchers behind the project.

Today, many systems generate images and sounds using a complex algorithm called a neural network. This is a way of identifying patterns in large amounts of data. By identifying common patterns in thousands of car photos, for instance, a neural network can learn to identify a car. But it can also work in the other direction: It can use those patterns to generate its own car photos.

As it built a system that generates new celebrity faces, the Nvidia team went a step further in an effort to make them far more believable. It set up two neural networks — one that generated the images and another that tried to determine whether those images were real or fake. These are called generative adversarial networks, or GANs. In essence, one system does its best to fool the other — and the other does its best not to be fooled.

“The computer learns to generate these images by playing a cat-and-mouse game against itself,” said Mr. Lehtinen.

A second team of Nvidia researchers recently built a system that can automatically alter a street photo taken on a summer’s day so that it looks like a snowy winter scene. Researchers at the University of California, Berkeley, have designed another that learns to convert horses into zebras and Monets into Van Goghs. DeepMind, a London-based A.I. lab owned by Google, is exploring technology that can generate its own videos. And Adobe is fashioning similar machine learning techniques with an eye toward pushing them into products like Photoshop, its popular image design tool.

Trained designers and engineers have long used technology like Photoshop and other programs to build realistic images from scratch. This is what movie effects houses do. But it is becoming easier for machines to learn how to generate these images on their own, said Durk Kingma, a researcher at OpenAI, the artificial intelligence lab founded by Tesla chief executive Elon Musk and others, who specializes in this kind of machine learning.

“We now have a model that can generate faces that are more diverse and in some ways more realistic than what we could program by hand,” he said, referring to Nvidia’s work in Finland.

But new concerns come with the power to create this kind of imagery.

With so much attention on fake media these days, we could soon face an even wider range of fabricated images than we do today.

“The concern is that these techniques will rise to the point where it becomes very difficult to discern truth from falsity,” said Tim Hwang, who previously oversaw A.I. policy at Google and is now director of the Ethics and Governance of Artificial Intelligence Fund, an effort to fund ethical A.I. research. “You might believe that accelerates problems we already have.”

The idea of generative adversarial networks was originally developed in 2014 by a researcher named Ian Goodfellow, while he was a Ph.D. student at the University of Montreal. He dreamed up the idea after an argument at a local bar, and built the first prototype that same night. Now Mr. Goodfellow is a researcher at Google, and his idea is among the most important and widely explored concepts in the rapidly accelerating world of artificial intelligence.

Though this kind of photo generation is currently limited to still images, many researchers believe it could expand to videos, games and virtual reality. But Mr. Kingma said this could take years, just because it will require much larger amounts of computing power. That is the primary problem that Nvidia is also working on, along with other chip makers.

Researchers are also using a wide range of other machine learning techniques to edit video in more convincing — and sometimes provocative — ways.

In August, a group at the University of Washington made headlines when they built a system that could put new words into the mouth of a Barack Obama video. Others, including Pinscreen, a California start-up, and iFlyTek of China, are developing similar techniques using images of President Donald Trump.”