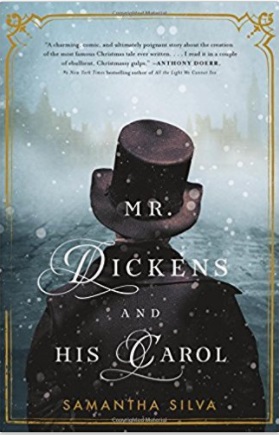 If you are looking for a book to put you into the holiday spirit, I strongly recommend, Mr. Dickens and His Carol, by Samantha Silva. This wonderful little book transports the reader back to London in 1843 and has Dickens flustered and desperate as he tries to write a Christmas novel against an impossible deadline.  Dickens develops writer’s block, his wife and children leave him, he is being hounded by his father and others for handouts, and is at wit’s end when he meets  Eleanor, who becomes his muse.  I won’t say anything more about the plot because it would be unfair to the reader and the way Silva twists and turns her story from chapter to chapter.  For those who know A Christmas Carol either from the book or from the many film editons (the one with Alastair Sim as Scrooge is the best), will find Silva’s novel a joy.

Here is an excerpt from a review that appeared in goodreads.

“For Charles Dickens, each Christmas has been better than the last. His novels are literary blockbusters, and he is famous on the streets of London, where avid fans sneak up on him to snip off pieces of his hair. He and his wife have five happy children, a sixth on the way, and a home filled with every comfort they could imagine. But when Dickens’ newest book is a flop, the glorious life he has built for himself threatens to collapse around him. His publishers offer an ultimatum: either he writes a Christmas book in a month, or they will call in his debts, and he could lose everything. Grudgingly, he accepts, but with relatives hounding him for loans, his wife and children planning an excessively lavish holiday party, and jealous critics going in for the kill, he is hardly feeling the Christmas spirit.

Increasingly frazzled and filled with self-doubt, Dickens seeks solace and inspiration in London itself, his great palace of thinking. And on one of his long walks, in a once-beloved square, he meets a young woman in a purple cloak, who might be just the muse he needs. Eleanor Lovejoy and her young son, Timothy, propel Dickens on a Scrooge-like journey through his Christmases past and present—but with time running out, will he find the perfect new story to save him?

In prose laced with humor, sumptuous Victorian detail, and charming winks to A Christmas Carol, Samantha Silva breathes new life into an adored classic. Perfect for fans of Dickens, for readers of immersive historical fiction, and for anyone looking for a dose of Christmas cheer, Mr. Dickens and His Carol is destined to become a perennial holiday favorite.”

For anyone wanting to take a deeper dive into Dickens, The Morgan Library and Museum on 35 Street and Madison Avenue here in Manhattan has an exhibit, Charles Dickens and the Spirit of Christmas.  You can see among other things, the original manuscript for A Christmas Carol.

God Bless Us.  Every one!