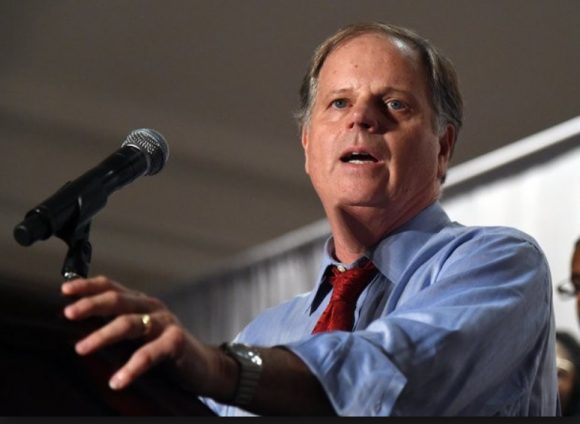 Doug Jones is the apparent winner in the special election for the US Senate for the state of Alabama.  I use the word “apparent” because as of this writing, Jones had a 1.5 percent lead over his opponent, Roy Moore, who has not conceded the election.  Just about every news outlet has determined Jones won the election.  With his victory, people from all walks of life are rejoicing.  Here is a sample.

“Congratulations to the people of Alabama for doing what few thought they would do. This is a victory not just for Jones and Democrats.  It is a victory for justice and decency.”

“Thank you for restoring my faith in humanity, Alabama.”

“Thank you to every Republican and Independent in Alabama who stood their ground & voted against a racist, homophobic, pedophile today.”

Frank Bruni in his column this morning described his jubilation as:

“For more than a year now, virtually all Democrats, many independents and even a significant share of Republicans have looked at President Donald Trump’s conduct and governing priorities and felt that they were suddenly in a foreign land. I count myself among this stunned and despairing group.

We saw decency in retreat. We saw common sense in decline. We saw a clique of unabashed plutocrats, Trump foremost among them, brazenly treating the federal government as a branding opportunity or a trough at which they could gorge. We saw a potent strain of authoritarianism jousting with the rule of law.

And we saw many Americans, including most Republican leaders, either endorsing or quietly putting up with this, to a point where we wondered if some corner had been turned forever.

That’s still an open question. But Alabamians provided a partial answer on Tuesday, showing that there are limits to what voters will tolerate, in terms of the lies they’ll believe, the vices they’ll ignore and the distance they’ll stray from civilized norms.”

I would thank the women who came forward and made public the abuse they suffered from Mr. Moore.  It is unlikely that Jones would have won without their disclosures.