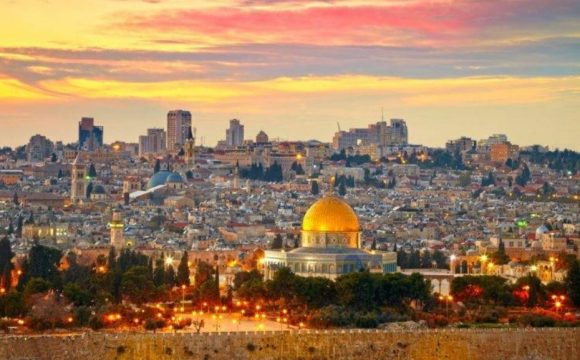 As expected, President Donald Trump’s announcement to recognize Jerusalem as Israel’s capital drew mixed responses from people all over the globe.  In the Middle East, pro-Israel individuals and groups saw it as a long-awaited right decision.  Pro-Palestinians saw it as an affront.  Here is an excerpt from a New York Times article that presents both sides.

“Palestinians burned photos of President Trump in Gaza, and the walls of the Old City were illuminated with the American and Israeli flags on Wednesday, as Mr. Trump made good on his campaign pledge to recognize Jerusalem as Israel’s capital.

In a much-anticipated speech from the White House, Mr. Trump argued that it was “the right thing to do” to acknowledge the reality that Jerusalem is the seat of Israel’s government. Decades of avoiding that fact, he said, has done little to resolve the protracted feud between Israelis and Palestinians.

“It would be folly to assume that repeating the exact same formula would now produce a different or better result,” Mr. Trump declared. Recognizing Jerusalem as Israel’s capital, he said, is “a long overdue step to advance the peace process.”

Mr. Trump said that the United States still wanted a negotiated peace agreement — and “would support a two-state solution if agreed to by both sides” — and that he was not seeking to dictate the boundaries of Israeli sovereignty in the fiercely contested Holy City.

“There will, of course, be disagreement and dissent regarding this announcement,” the president said. He appealed for “calm, for moderation, and for the voices of tolerance to prevail over the purveyors of hate.”

Mr. Trump’s recognition of Jerusalem isolates the United States on one of the world’s most sensitive diplomatic issues. It drew a storm of criticism from Arab and European leaders, including some of America’s closest allies.

Many said that Mr. Trump’s move was destabilizing, that it risked setting off violence and that it would make achieving peace even more difficult. It also threw into doubt his ability to maintain the United States’ longstanding role as a mediator of the Israeli-Palestinian conflict.

Mr. Trump’s break with policy and international consensus included setting into motion a plan to move the United States Embassy from Tel Aviv to Jerusalem. Although that will not happen right away, Palestinians saw it as a deep affront.

The Palestinian president, Mahmoud Abbas, a veteran of the peace process, said bitterly that the United States had effectively scrapped it. Saeb Erekat, the chief Palestinian negotiator, called for the abandonment of a two-state solution altogether.

Among Israelis, however, Mr. Trump’s announcement drew praise, not only from Prime Minister Benjamin Netanyahu’s right-wing government but also from liberal opposition leaders. “The Jewish people and the Jewish state will be forever grateful,” Mr. Netanyahu said in a video, calling Mr. Trump’s decision “courageous and just” and “an important step towards peace.”

Yair Lapid, the leader of Yesh Atid, a center-left opposition party, said: “Policies should not be dictated by threats and intimidation. If violence is the only argument against moving the embassy to Jerusalem, then it only proves it is the right thing to do.”

Naftali Bennett, the education minister and leader of the right-wing Jewish Home party, said American recognition of Jerusalem as Israel’s capital “shows that Israel’s strategic patience has paid off.”

“We have been told again and again that if we want more acceptance, we have to cut off parts of Israel and hand them over to our enemies,” he said. “What we are learning is the contrary: The world respects strong countries who believe in themselves and looks down on countries willing to give up their homeland.”

Yet Israelis also braced for violence, as some Palestinian leaders urged a third intifada, or armed uprising.”

I don’t understand the timing of Mr. Trump’s decision given that his son-in-law, Jared Kushner, is in the middle of peace negotiations between Jews and Palestinians.  I am also afraid that it will fuel more violence in the area.