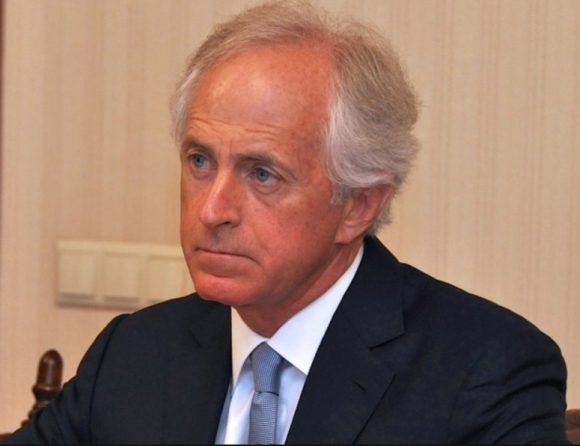 In a series of tweets, President Trump and Republican Senator Bob Corker (Tennessee) exchanged cutting barbs with each other yesterday.   As reported in the New York Times.

“Senator Bob Corker, the Republican chairman of the Senate Foreign Relations Committee, charged in an interview on Sunday that President Trump was treating his office like “a reality show,” with reckless threats toward other countries that could set the nation “on the path to World War III.”

In an extraordinary rebuke of a president of his own party, Mr. Corker said he was alarmed about a president who acts “like he’s doing ‘The Apprentice’ or something.”

“He concerns me,” Mr. Corker added. “He would have to concern anyone who cares about our nation.”

Mr. Corker’s comments capped a remarkable day of sulfurous insults between the president and the Tennessee senator — a powerful, if lame-duck, lawmaker, whose support will be critical to the president on tax reform and the fate of the Iran nuclear deal.

It began on Sunday morning when Mr. Trump, posting on Twitter, accused Mr. Corker of deciding not to run for re-election because he “didn’t have the guts.” Mr. Corker shot back in his own tweet: “It’s a shame the White House has become an adult day care center. Someone obviously missed their shift this morning.”

The senator, Mr. Trump said, had “begged” for his endorsement. “I said ‘NO’ and he dropped out (said he could not win without my endorsement),” the president wrote. He also said that Mr. Corker had asked to be secretary of state. “I said ‘NO THANKS,’” he wrote.

Mr. Corker flatly disputed that account, saying Mr. Trump had urged him to run again, and promised to endorse him if he did. But the exchange laid bare a deeper rift: The senator views Mr. Trump as given to irresponsible outbursts — a political novice who has failed to make the transition from show business.

Mr. Trump poses such an acute risk, the senator said, that a coterie of senior administration officials must protect him from his own instincts. “I know for a fact that every single day at the White House, it’s a situation of trying to contain him,” Mr. Corker said in a telephone interview.”

More senior members of the Republican Party have got to fess up to the mess that Mr. Trump has brought to the presidency.