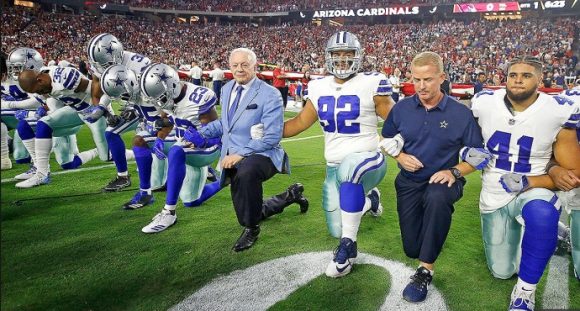 The owner of the Dallas Cowboys, Jerry Jones, has decided that the team will not tolerate players who protest during the playing of the national anthem.  Speaking after the Cowboys game on Sunday, Jones said any players who disrespect the flag “will not play.”

According to ESPN, the topic was raised after Vice President Mike Pence left the Indianapolis Colts-San Francisco 49ers game early on Sunday after players knelt during the national anthem. In a statement, Pence said he will not dignify an event that disrespects the military and the US.

The event comes after President Donald Trump said NFL owners should “fire” any player that kneels during the anthem. Trump on Sunday said that he told Pence to leave early if any players knelt.

On September 25, in the wake of Trump’s comments and widespread protest around the NFL, Jones and the Cowboys linked arms and knelt before the anthem, but stood during the anthem. Following the Cowboys’ gesture, Trump said he spoke to Jones — who donated to Trump’s campaign — and that the team will stand for the anthem going forward.