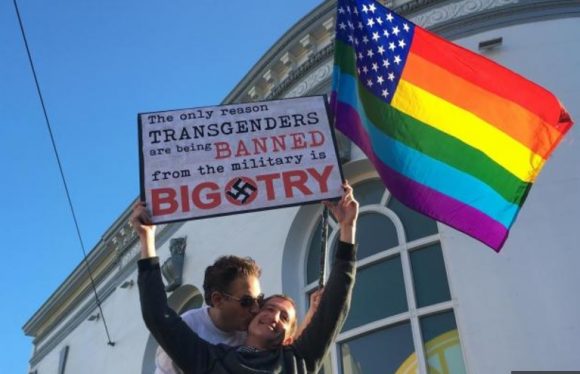 Donald Trump directed his nasty nature to transgender Americans yesterday by barring them from serving in the military.  In an unexpected announcement, Trump declared “please be advised that the United States Government will not accept or allow transgender individuals to serve in any capacity in the U.S. Military.”  This is just one year after transgender Americans secured the right to be members of the armed forces under President Obama.  Below is a New York Times editorial panning Trump’s decision.

Uncle Sam No Longer Wants You

A year after transgender Americans secured the right to defend their nation as equals in the military service, President Trump, in one of his crueler series of tweets, declared on Wednesday that he was banishing them from serving. This was obvious pandering to regressive generals and right-wing zealots as well as an effort to shift the focus from his dysfunctional White House.

“After consultation with my Generals and military experts,” he announced with Caesarean certitude, “please be advised that the United States Government will not accept or allow Transgender individuals to serve in any capacity in the U.S. Military.” Adding insult to injury, Mr. Trump, who secured a Vietnam draft deferment for bone spurs, said the military “must be focused on decisive and overwhelming victory” — as if transgender enlistees would be feeble wimps after volunteering for battle.

Transgender troops were quickly defended by Senator John McCain for “serving honorably today,” and by another Republican, Senator Orrin Hatch, who said, “Transgender people are people, and deserve the best we can do for them.”

The about-face on a basic human rights issue was not entirely unexpected. Last month, Defense Secretary Jim Mattis delayed for six months the Obama administration’s July 1 deadline for admitting transgender recruits. Mr. Mattis said more review was needed on how they would affect “readiness and lethality” of military forces.

Vice President Mike Pence’s staff reportedly worked with conservative House Republicans to try to bar payment for transition surgery and hormone therapy. In his tweets, Mr. Trump contended transgender troops would burden the military with “tremendous medical costs and disruption.” But this is unsubstantiated nonsense. The Obama policy required individuals to “have been stable in their preferred gender” for at least 18 months and to have completed the transition medical treatment they expected to have.

Mr. Trump’s rationale is particularly absurd, considering there are estimated to be only about 2,450 transgender troops among 1.3 million active-duty members of the military, according to a RAND Corporation study.

A year ago, the military tradition of treating transgender individuals as perverts seemed at an end when the Obama administration made gender identity a protected category in the Pentagon’s equal opportunity policy. The administration also ended the ban on gay recruits, opened all combat roles to women and named the first openly gay Army secretary.

How much deeper a retreat might Mr. Trump demand from these enlightened policies? Mr. Mattis, while given high marks as a military leader, was close-mouthed on the transgender issue during his confirmation hearing. A 2016 book he co-edited warned that new social standards imposed by political leaders “are diminishing the combat power of our military.”

So what will be the fate of those already in uniform? Will they be hounded from service? That the White House could not even answer such questions on Wednesday demonstrates how thoughtless and cruel this policy is.