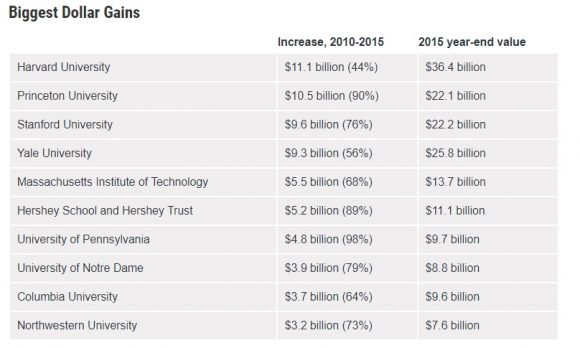 Nonprofits including college and universities with large endowments are collecting more than twice as much money as they are spending on grants, facilities, administrative and other costs, a new data analysis of 1,600 organizations by The Chronicle of Philanthropy shows. In fact, for 253 of the more than 1,600 nonprofits studied, the dollars flowing into their endowments over six years exceeded the dollars flowing out by a ratio of more than four to one.  The graphic above shows the ten largest endowment gains during the period (2010-2015) of the analysis.   As reported by the Chronicle:

“The findings raise questions about the size of their swelling endowments at a time when Congress is taking a closer look at the issue. Orrin Hatch, the chairman of the Senate Finance Committee, has said big university endowments will be scrutinized as part of Republicans’ review of the tax code this year. Among the concerns is that the richest nonprofit institutions are sitting on huge and growing reserves — their investment returns are not taxed — even as many students struggle to pay for postsecondary education.

While colleges dominate the list of the biggest endowment holders, a Chronicle study of large nonprofit endowments shows that other types of nonprofits are also adding dollars much faster than money is going out.

Most nonprofits have no endowment at all. And a large or fast-growing endowment is not evidence that an institution is hoarding cash. Any scrutiny of such reserves must be done on a case-by-case basis, nonprofit tax-law experts say, and take into consideration a nonprofit’s mission, revenue model, and any specific goals and capital projects.
Leaders in charge of some of the country’s largest nonprofit endowments say they help sustain valuable work and act as a buffer against downturns in fundraising or sudden spikes in demand for programs and services.

Gary Tinterow, director of the Museum of Fine Arts, Houston, said scaling back the museum’s endowment would eventually force sharp reductions in exhibits and in staff. The museum added $703.7 million to its endowment from the beginning of 2010 through the end of 2015, while spending $310.5 million from the fund, Its endowment stands at about $1.1 billion. If Congress needs tax revenue, nonprofits are the wrong place to look for it, said Mr. Tinterow.

But critics say some groups are sitting on too much money.

“We don’t have infinite charitable resources. We have to accomplish as much as we can with the limited charitable resources we have,” said Daniel Borochoff, president of the watchdog group CharityWatch. “So if groups decide to stockpile it, then that money is not freely available. It is not available to groups that would be using it to help people in need that are not receiving help, particularly with the government cutbacks.”

The data presented by the Chronicle is interesting but the nature and situation of the non-profits is different than that of the colleges and universities that operate to a degree on market system regarding tuition.  I believe college and university endowments should be reviewed to determine if more should be done with these funds to offset tuition charges.