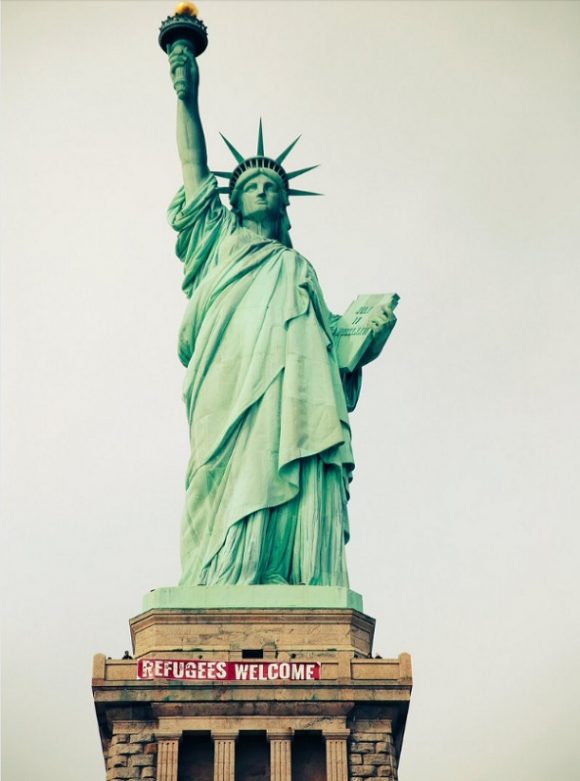 Activist scaled the Statue of Liberty and unfurled a red and white “Refugees Welcome” banner on Tuesday, just hours after the Department of Homeland Security unveiled its sweeping plan to deport undocumented immigrants across the U.S.

The banner, which measured 3 feet by 20 feet in length, was unrolled and dangled from the statue’s observation deck, the National Park Service said.

The sign was removed more than an hour later after it surfaced, the Associated Press reported, but not before images spread like wildfire on social media.

According to CNN, an activist group called Alt Lady Liberty claimed responsibility for the banner. “​Almost all Americans have descendants from somewhere else,” the group told CNN. “Immigrants and refugees make this country great. And turning away refugees, like we did to Anne Frank, does not make us great.”

Alt Lady Liberty posted several images of the banner on its Twitter account, with one caption reading: “The message of the Statue of Liberty is unmistakable.”

As a reminder, the plaque at the base of the Statue of Liberty reads: “Give me your tired, your poor, your huddled masses yearning to breathe free, the wretched refuse of your teeming shore. Send these, the homeless, tempest-tossed to me, I lift my lamp beside the golden door!”