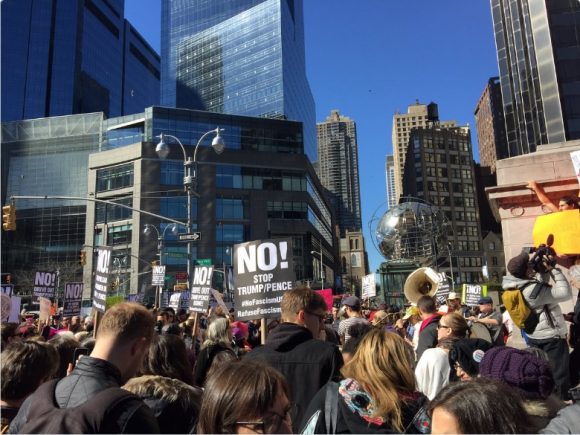 Yesterday marked the first “Not My Presidents Day” as thousands of people protested Donald Trump in cities all over the country including Los Angeles, New York City, Chicago, Austin, Atlanta, Philadelphia, Denver and Washington, D.C.

In New York, protesters gathered outside Trump International Hotel and Tower to hoist signs that defended refugees, condemned the president’s Cabinet picks, and called for his impeachment. Families and individuals of all ages chanted “Not my president!” and “Black lives matter!”

Here are comments from protesters courtesy of The Huffington Post:

Mercedes Vizcaino, 42, works in New York City and came to Monday’s protest with a friend who is a science teacher.

“I think it’s important to take a stand and not be complicit about what’s going on in the country,” Vizcaino said. “Democracy as we know it is being challenged. … My freedoms that I’ve cherished and perhaps never thought about disappearing, right now I know they may be taken away.”

Richard Rumph, a retired New York City elementary school teacher, said he couldn’t recall attending a rally before Trump took office. He joined in on Monday partly because he objects to Betsy DeVos, the education secretary.

The “Not My Presidents Day” events are the latest in a wave of protests that have followed Trump’s inauguration, starting with the women’s marches on Jan. 21. After Trump imposed a contentious executive order halting refugee resettlement and travelers from several Muslim-majority countries, protesters rallied at airports around the country. Last week, the “Day Without Immigrants” movement inspired rallies and shuttered businesses nationwide.

Former Illinois Gov. Pat Quinn (D) was in the crowd in Chicago, gathering signatures for a local ballot initiative. He said the uptick in protests since inauguration was necessary in the Trump era.

“Freedom of assembly, freedom to protest, freedom of the press — these are all freedoms under attack by Trump,” Quinn said. “We’re going to resist authoritarianism. That’s what Trump is — an authoritarian.”

Olga Lexell, 24, helped plan the protest at Los Angeles city hall. The Facebook invite for the event spurred interest from other cities, and Lexell recruited volunteers in New York and Chicago to set up protests there. Most of the sister rallies were organized independently by grassroots volunteers and are focused on how Trump’s plans affect their cities.

“Pretty much all of the people who volunteered to help us organize turned out to be women,” Lexell told The Huffington Post in an email. “Women are really leading the charge with the anti-Trump resistance.”

Lexell said Monday’s protests had mostly been organized through Facebook and word of mouth. She planned the LA event with Heather Mason, one of her friends.

“I don’t think either of us had ever organized any kind of protest or rally of this size before, but it just felt like something we had to do to have our voices heard,” Lexell said. “Lately I’ve been afraid because of the overwhelming anti-immigrant sentiment he’s building; I’m an immigrant myself, so that’s terrifying to me.”

Mason, 28, said she thinks Californians have a responsibility to lead the resistance to the administration’s efforts.

“After Trump was elected I cried and was physically ill honestly,” Mason said. “I felt miserable and depressed for days. And then I joined the Action Group Network and began brainstorming with friends as to what we could do to feel less useless.”

Voices are being heard throughout the country!  It will be interesting to see how this plays out over the next several months.