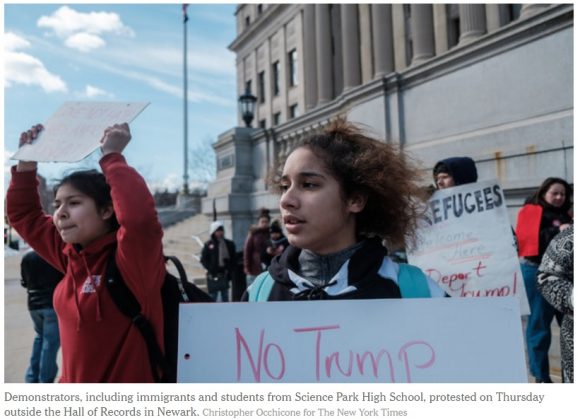 During a press conference yesterday, Donald Trump ranted about the biased media, Hillary Clinton and his electoral college win while immigrants around the country stayed home and did not go to work.  As reported in the New York Times:

“It first spread on social media, rippling through immigrant communities like the opposite of fear and rumor: a call to boycott…Around the country, many cooks, carpenters, plumbers and grocery store owners decided to answer it and not work on Thursday as part of a national “day without immigrants” in protest of the Trump administration’s policies toward them.

The protest called for immigrants, whether naturalized citizens or undocumented, to stay home from work or school, close their businesses and abstain from shopping. People planned for it in restaurant staff meetings, on construction sites and on commuter buses, but the movement spread mostly on Facebook and via WhatsApp, the messaging service. No national group organized the action.

“It’s like the Arab Spring,” said Manuel Castro, the executive director of NICE, short for New Immigrant Community Empowerment, which works primarily with Hispanic immigrant day laborers in Jackson Heights, Queens. “Our members were coming to us, asking what the plan was. Frankly, it kind of came out of nowhere.”

But what began as a grass-roots movement quickly reached the highest levels of federal government. In Washington, the Pentagon warned its employees that a number of its food concessions, including Sbarro’s, Starbucks and Taco Bell, were closed because immigrant employees had stayed home and that they could expect longer lines at restaurants that were open.

Restaurants, from San Francisco to Phoenix to Washington, D.C., were some of the most visible spots affected, with well-known chefs closing some of their eateries for the day in support. Rick Bayless, the Chicago chef and owner of the Frontera Grill, closed several of his restaurants and said he would give a portion of the revenue from the ones that remained open to an immigrant and refugee rights group.

“What really makes our country great is the diversity we experience here,” Mr. Bayless said in an interview. “I can’t say enough about the lack of respect and the fear-mongering and hate-mongering that I’m sensing around us these days.”

Sadly, so much of the fear-mongering and hate-mongering has been fueled by the White House!