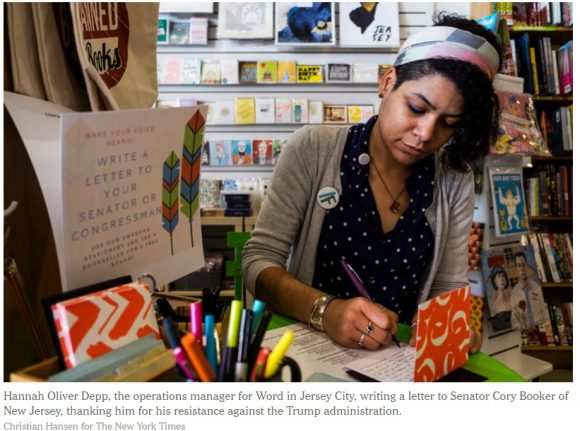 Neighborhood bookstores around the country are becoming focal points in the anti-Trump movement.  Here is an excerpt from a New York Times article describing what is going on.

“A hundred people packed a bookstore in Brooklyn to write postcards to elected officials and, as the invitation urged, “plot next steps.” In St. Louis, bookstore owners began planning a writer-studded event to benefit area refugees. At a bookshop in Massachusetts, a manager privately asked his senior staff members how the store should respond to the Trump presidency.

In the diffuse and suddenly fierce protest movement that has sprung up on the left since President Trump took office, bookstores have entered the fray, taking on roles ranging from meeting place to political war room.

Many stores have distributed information for customers who are mobilizing against Mr. Trump’s actions: his cabinet choices, his threat to cut off funding for sanctuary cities and his immigration bans on refugees and many Muslims. At City Stacks, a bookstore in Denver, employees printed out forms with elected officials’ contact information in a gentle nudge to customers.

On Inauguration Day, Broadway Books in Portland, Ore., handed out free copies of “We Should All Be Feminists,” a book-length call to arms by Chimamanda Ngozi Adichie, the novelist.

All over the country, independent bookstores have filled their windows and displays with “1984,” by George Orwell; “It Can’t Happen Here,” by Sinclair Lewis; and other books on politics, fascism, totalitarianism and social justice. Booksellers have begun calling the front table devoted to those titles the #Resist table.

“A lot of people are saying, ‘We’ve turned our store over to the revolution,’” said Hannah Oliver Depp, the operations manager for Word, which has bookstores in New Jersey and New York. “I do think that it is going to fundamentally change bookstores and book selling.”

The pen is mightier than the sword!