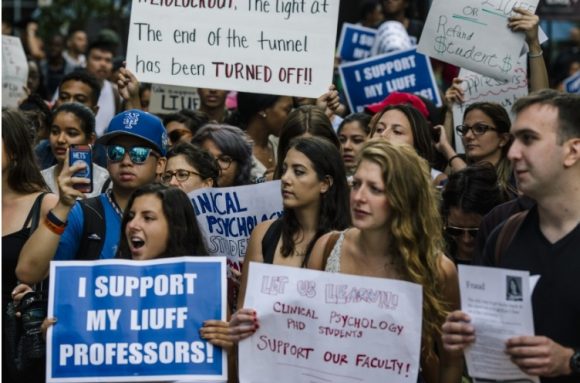 At Long Island University’s Brooklyn campus,  yesterday was Day 11 of the faculty lockout  of 236 full-time professors and 450 adjuncts.  On Monday, about 200 students walked out of their classes to join faculty members in protesting the extreme measure. “They say lock out, we say walk out,” some students chanted. “Let us learn,” they yelled. “Let us teach,” professors responded, standing outside the campus’s green gates.  As reported by The Chronicle of Higher Education:

“Students aren’t just protesting the lockout, but also the army of temporary instructors and administrators who are fielding their classes, which started last week, in place of their professors. Many students said instructors were merely taking attendance and then dismissing students, leaving them to wonder what they are paying for.

But these grievances have been well-catalogued, as labor activists and professors nationwide publicize the cause of the Brooklyn campus’s faculty. What’s less apparent amid all the noise: What is the administration thinking?

On Tuesday morning, administrators said they were prepared to take a few hits and make sacrifices if it means keeping costs down for students.

“Every student here has a compelling story,” said Gale Haynes, the campus’s chief operating officer and general counsel. “You realize what sacrifices they’ve made in their journey to be here, and you have to be prepared to make similar sacrifices to get them through.”

Members of the Long Island University Faculty Federation, the faculty’s union, have, among other things, demanded that their new contract mend the pay disparity between the Brooklyn campus and LIU’s Post campus, in Brookville, N.Y.

The university’s last published contract offer proposes that Brooklyn faculty members whose salaries are less than 2 percent below the minimum salary of a Post faculty member of the same rank get a salary adjustment this year to bring their pay up to the Post minimum, then a 1.75-percent raise each year from 2016 to 2018, and a 2.25-percent raise in 2019 and 2020. Brooklyn faculty members whose pay is more than 2 percent below the minimum for a Post professor of the same rank would get 2-percent raises each year until they reached the Post minimum.

Christopher Fevola, the university’s chief financial officer, said it’s difficult to offer much more than the figures in the proposed contract because of the university’s 2014 pledge to not raise tuition by more than 2 percent a year until 2020. Ninety-one percent of the campus’s funding comes from tuition revenue, the administration says, while labor makes up two-thirds of the university’s total operating cost.

“From a fiscal perspective it’s very important that we’re able to manage the institution and do so in a way that we are not passing those costs on to our students,” Mr. Fevola said. “I think there’s a national awareness around tuition affordability and institutions being able to live within their means.”

But when asked to provide details on how, specifically, salary increases requested by the union would translate into tuition increases, Mr. Fevola and Ms. Haynes said they could not disclose that number because negotiations were still going on.

Union leaders and university administrators last met in a seven-hour negotiating session on Monday night, and are scheduled to meet again on Wednesday. Mr. Fevola said he’s confident that the gap between the two sides will continue to close.”

We wish our faculty colleagues at LIU well and hope that they are back in their classrooms soon.