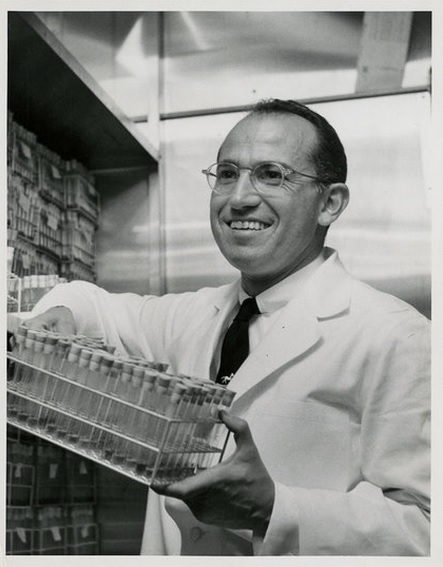 If you are looking for a biography to read this summer, I would recommend, Jonas Salk: A Life, by Charlotte DeCroes Jacobs. It is a good retelling of the story of Salk, who was raised in the Bronx, attended City College and NYU, and goes on to develop the vaccine that stems polio in this country and around the world.

Jacobs is a good story-teller and is at her best when telling of the trials and tribulations of developing vaccines. Here is an excerpt from the New York Times Book Review:

“Jacobs, a professor emerita of medicine at Stanford, neatly splits “Jonas Salk” into two “acts.” The first is a vivid if by now familiar retelling of Salk’s early life, medical training, foray into polio research and fateful connection to Basil O’Connor, president of the National Foundation for Infantile Paralysis, known as the March of Dimes. Unlike other researchers, who were inching along in search of a live-virus vaccine, Salk had produced a killed-virus version with impressive results. It may not have been perfect, but it took a lot less time to develop. With polio raging each summer, a sense of urgency prevailed, giving Salk the upper hand. As O’Connor put it, “He sees beyond the microscope.”

In 1954, the March of Dimes sponsored the Salk vaccine polio trials. More than a million schoolchildren took part, some getting the real vaccine, others a look-alike placebo. Parents frantically pushed their children into line. They didn’t need to be educated about the risks and rewards of the vaccine. The evidence was everywhere: children in leg braces, wheelchairs, iron lungs — and coffins. The Salk trials rank among the great successes of modern medicine, and Jacobs tells the story as well as it’s ever been told. This is science writing at its best.”

I especially liked the sections on Salk’s competition with Albert Sabin (Sabin Vaccine) and the development and struggles of the Salk Institute in La Jolla. Jacobs also does not neglect Salk’s personal life (early childhood, marriage, divorce, remarriage).