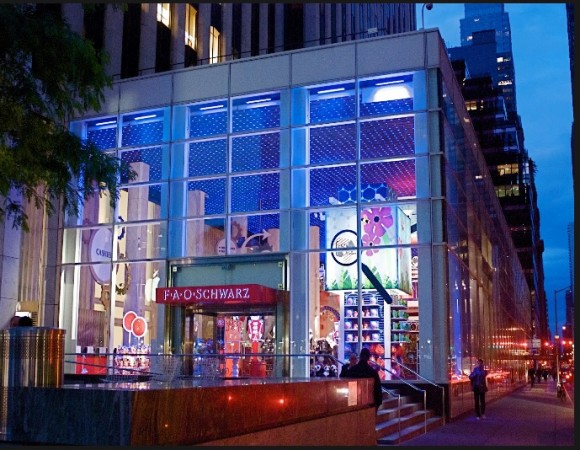 As a child in the 1950s, I remember my father taking me to F.A.O. Schwarz. The past several years, I have been taking my grandchildren, Michael and Ali, to experience the same wonder that I did looking at the fabulous assortment of toys. A New York Times article this morning provided a bit more history:

“F. A. O. Schwarz remains one of New York’s most venerable retail brands, having outlasted other carriage-trade stores such as B. Altman, Bonwit Teller and Best & Company. The store began as Schwarz Brothers Importers soon after the Civil War. It was the Manhattan outpost of a family-run operation from Baltimore, but the other brothers disappeared from the marquee in a few years. The one who remained, Frederick August Otto Schwarz, made the store his. It probably helped that many people saw in him more than a passing resemblance to Santa Claus.

He concentrated on intriguing toys at premium prices. He had to, said Christopher Byrne, the creative director of TTPM.com, an online toy review — in those days, most toys were imported from Europe. “There were very, very few manufactured toys in the U.S.,” he said. “These were luxury goods, the dolls and the trains and the building blocks, and these were unheard-of.”

There was a time when F. A. O. Schwarz was a status symbol. “Their slate blue box under the Christmas tree was as impressive to child as a Tiffany box would have been to a grown-up in New York,” Mr. Byrne said.

Those were the days when F. A. O. Schwarz published “this huge Neiman Marcus-style catalog that came to people’s homes.” He said the catalog, as much as anything else, had established the company’s identity from the moment Mr. Schwarz put out the first one in the 1870s. But catalogs have long since become passé, and ogling toys in a store “is not really an American pastime anymore,” he said.

“Kids still love looking at toys, but they’re doing it on their iPads and their phones and their different devices,” he said. “The image of the saucer-eyed child looking at some object of desire is the same, but the child is looking at a tablet.”