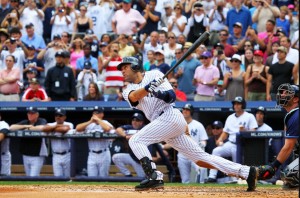 New York Yankee fans have known for a while that the day was coming sooner than later when Derek Jeter would be retiring from baseball.  He made the announcement yesterday that 2014 would be his last season in pinstripes.  He has meant so much to the team, to baseball, and to New York.  A class act both on and off the field.

I have been a Yankee fan my entire life and was born and raised several blocks from Yankee Stadium in the South Bronx.  With my brothers, I saw all the great teams and players of the 1950s, the down years in the late 1960s and early 1970s, and the comeback years under the ownership of George Steinbrenner.  I have to put Derek Jeter as the best all-around Yankee that I have ever seen.  Hitting, fielding, running the bases, and making clutch plays – he could do it all!

I will relish watching him this season and hope that injuries do not prevent him from going out on the top of his game.