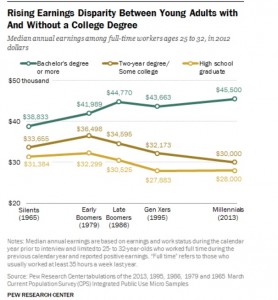 According to a new study by the Pew Research Center, the earnings gap between young adults with and without bachelor’s degrees has stretched to its widest level in forty-eight years. Young adults with just a high-school diploma earned 62 percent of the typical salary of college graduates. That’s down from 81 percent in 1965, the earliest year for which comparable data are available.  As reported in The Huffington Post;

“The analysis by the Pew Research Center shows the increasing economic difficulties for young adults who lack a bachelor’s degree in today’s economy that’s polarized between high- and low-wage work. As a whole, high-school graduates were more likely to live in poverty and be dissatisfied with their jobs, if not unemployed.

In contrast, roughly nine in 10 college graduates ages 25 to 32 said that their bachelor’s degree had paid off or will pay off in the future, according to Pew’s separate polling conducted last year. Even among the two-thirds of young adults who borrowed money for college, about 86 percent said their degrees have been, or will be, worth it.

“In today’s knowledge-based economy, the only thing more expensive than getting a college education is not getting one,” said Paul Taylor, Pew’s executive vice president and co-author of the report. “Young adults see significant economic gains from getting a college degree regardless of the level of student debt they have taken on.”

The latest findings come amid rising college tuition costs, which have saddled young adults in the so-called Millennial generation with heavy debt amid high unemployment…

The report found that not only does a college degree typically yield much more inflation-adjusted earnings than before, but a high-school diploma also is now worth less. That adds to a widening earnings gap that Pew researchers found mirrors the U.S. gap between rich and poor.

For instance, college graduates ages 25 to 32 who were working full time now typically earn about $17,500 more annually than employed young adults with just a high school diploma ($45,500 vs. $28,000); those with a two-year degree or some college training earned $30,000. In 1965, before globalization and automation wiped out many middle-class jobs in areas such as manufacturing, the inflation-adjusted gap was just $7,449.

Pew based its findings on the Census Bureau’s Current Population Survey as of March 2013, as well as its own survey of 2,002 adults interviewed by cellphone or landline from Oct. 7-27, 2013. The Pew poll has a margin of error of plus or minus 2.7 percentage points.

It is obvious that we need to continue to push for policies in this country emanating in Washington, D.C.  and in state governments that ease the way for attaining a college degree and that investments in colleges and universities are good for our young people and good for our economy. 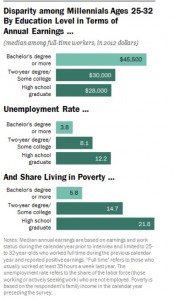