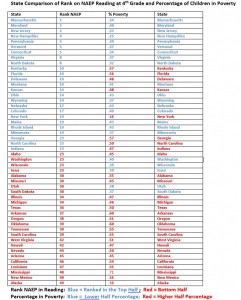 Yesterday, I posted on a report issued by the Southern Education Foundation based on the number of students from preschool through 12th grade who were eligible for the federal free and reduced-price meals program in the 2010-11 school year.

“The analysis done by the Southern Education Foundation indicated that by 2011, almost half of the nation’s 50 million public-school students — 48 percent — qualified for free or reduced-price meals. In some states, such as Mississippi, that proportion rose as high as 71 percent.”

The report also indicated that overall children in families with higher incomes did better on standardized tests such as NAEP than students from lower income families.

NOTE:  Data for the NAEP rankings were accessed from the Kansas Open Government website at: