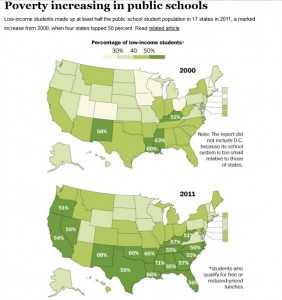 Diane Ravitch in her blog yesterday directed attention to the shameful fact that the United States has a greater proportion of children living in poverty than any other advanced nation in the world.

As reported by Lyndsey Layton of the Washington Post, the majority of public school students in the South and the West now qualify for free or reduced price lunch. By federal standards, that means they are poor. The analysis by the Southern Education Foundation, the nation’s oldest education  philanthropy, is based on the number of students from preschool through 12th grade who were eligible for the federal free and reduced-price meals program in the 2010-11 school year.

“The analysis done by the Southern Education Foundation indicated that by 2011, almost half of the nation’s 50 million public-school students — 48 percent — qualified for free or reduced-price meals. In some states, such as Mississippi, that proportion rose as high as 71 percent.

Southern states have seen rising numbers of poor students for the past decade, but the trend spread west in 2011, to include rapidly increasing levels of poverty among students in California, Nevada, Oregon and New Mexico.

The 2008 recession, immigration and a high birthrate among low-income families have largely fueled the changes, said Steve Suitts, vice president of the Southern Education Foundation and an author of the study.

Maryland and Virginia were the only Southern states where low-income children did not make up a majority of public-school students.

Ravitch takes aim at the education-industrial complex in this country for allowing this to have happened:

“Arne Duncan, Bill Gates, Wendy Kopp, and Joel Klein have said that the answer to poverty is to “fix” schools first? Remember their claims that school reform (more testing, more charters, more inexperienced teachers, larger classes, more technology) would vanquish poverty? For the past decade, our society has followed their advice, pouring billions into the pockets of the testing industry, consultants, and technology companies, as well as the over-hyped charter industry, Teach for America, and the multi-billion-dollar search for a surefire metric to evaluate teachers….

The late Senator Daniel Patrick Moynihan once remarked on the phenomenon of “feeding the horses to feed the sparrows.” In this case, the horses are the educational industrial complex. They are gobbling up federal, state, and local funding while children and families go hungry, lacking the medical care, economic security, and essential services they need. Instead of helping their families to become self-sufficient, we are fattening the testing industry. Instead of assuring that their schools have the guidance counselors, social workers, psychologists, and librarians the children need, our states are stripping their schools to the bare walls. Instead of supplying the arts and physical education that children need to nourish body and soul, we let them eat tests. Instead of giving the reduced class size where they get the attention they need, they sit in packed classrooms.

Every dollar that fattens the educational industrial complex — not only the testing industry and the inexperienced, ill-trained Teach for America, but the corporations now collecting hundreds of millions of dollars to tell schools what to do — is a dollar diverted from what should be done now to address directly the pressing needs of our nation’s most vulnerable children, whose numbers continue to escalate, demonstrating the utter futility and self-serving nature of what is currently and deceptively called “reform.”

Once these futile programs have collapsed, once they have been exposed as hollow (though lucrative) gestures, we will look back with sorrow at the lives wasted, the billions squandered, the incalculable damage to our children and our society.”

Ravitch is on target.   The education-industrial complex is indeed at the root of many of the problems in our public schools.