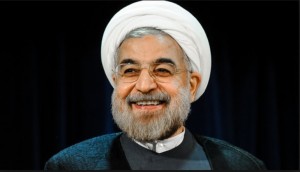 This week, the media swarmed over Iran’s new president, Hassan Rouhani, mainly because of his  conciliatory comments about the Holocaust, Iran’s nuclear program, and his relations with the United States.  He has left many officials, reporters, and pundits wondering whether he is sincere.  Tom Friedman provides some insight into Rouhani’s positions and motives in his New York Times column today.   In addition to attending the usual press conferences, Friedman bases his analysis on a discussion with Rouhani’s chief of staff, Mohammad Nahavandian, who is an economist, earned his Ph.D. at George Washington University, and recently led the Iran Chamber of Commerce and Iran’s negotiating team to join the World Trade Organization. According to Friedman, Rouhani is here because Iran’s regime is both overextended and underintegrated.

“Today, Iran’s regime is overextended, expending men and money and energy every day to keep the Syrian regime alive, Hezbollah on its feet in Lebanon and its allies fortified in Iraq and Afghanistan. But while the regime is overextended, Iranians under age 30 — some 60 percent of the population — feel underintegrated with the rest of the world. They want to be able to study, work and travel in — and listen to music, read books and watch films from  — the rest of the world. That means lifting sanctions.”

“Geopolitics is all about leverage: who’s got it and who doesn’t. Today, the negotiating table is tilted our way. That is to Obama’s credit. We should offer Iranians a deal that accedes to their desire for civilian nuclear power and thus affirms their scientific prowess — remember that Iran’s 1979 revolution was as much a nationalist rebellion against a regime installed by the West as a religious revolution, so having a nuclear program has broad nationalist appeal there — while insisting on a foolproof inspection regime. We can accept that deal, but can they? I don’t know. But if we put it on the table and make it public, so the Iranian people also get a vote — not just the pragmatists and hard-liners in the regime — you’ll see some real politics break out there, and it won’t merely be about the quality of Iran’s nuclear program but about the quality of life in Iran.”

This seems like good advice and President Obama is wise in showing his willingness in  working with Rouhani.  We can only hope it leads to a more peaceful relationship between the two countries.