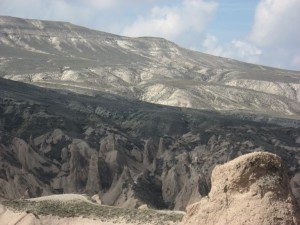 Elaine and I flew to Cappadocia today in central Turkey about 700 miles from Istanbul.  The major city is Kayseri (in English Caesarea) which has been inhabited since 3000 BC.  The area is steep in history and has been inhabited by multiple cultures.  The Persians, Greeks, Romans and Ottoman Turks conquered the area and subjected the people to an endless tug of war of loyalty to one ruler or the other.  As late as 1924, because of the friction between Greeks and Turks, Greece and Turkey agreed on a mandatory resettlement policy which required Christians living in Turkey and especially Cappadocia to resettle in Greece and all Muslims living in Greece to resettle in Turkey.

In addition to its history, Cappadocia has geologic sites like no other on Earth.  We visited Devrent Valley (aka Imaginary Valley) and Pasabag Valley (aka Monk’s Valley) which have incredible rock formations referred to as “fairy chimneys” created by the eruptions of multiple volcanoes about 60 million years ago.  In earlier times, people in the area dug caves in these “chimneys” and lived in them.    Some very poor and homeless people still live in them today.  A tourist industry is evolving here with cave restaurants, cafes, and small hotels carved out of the rocks. The accompanying photos on this page give you a sense of the area but do not do justice to the feel of the place.  Walking in these valleys among the “chimneys” is like walking on another planet.  In fact, the area was used to shoot scenes for several of the Star Wars movies for this very reason.

A special day in a different world! 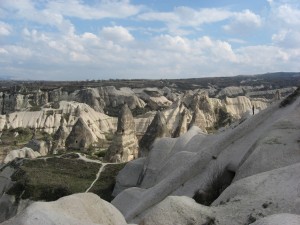 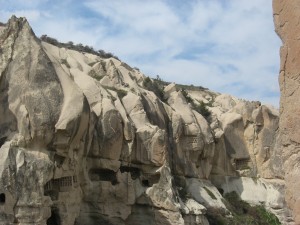 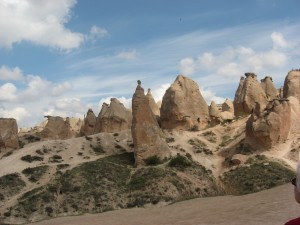 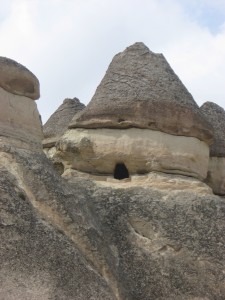