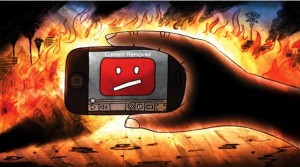 Somini Sengupta, a technology correspondent for The New York Times, has an essay today, reviewing the issue of free speech on the Internet.  This is ground that has been covered many times in various media but deserves another examination in light of the anti-Islam video that sparked protest throughout the Muslim world.  Sengupta reports

“The storm over an incendiary anti-Islamic video posted on YouTube has stirred fresh debate on these issues. Google, which owns YouTube, restricted access to the video in Egypt and Libya, after the killing of a United States ambassador and three other Americans. Then, it pulled the plug on the video in five other countries, where the content violated local laws.

Some countries blocked YouTube altogether, though that didn’t stop the bloodshed: in Pakistan, where elections are to be scheduled soon, riots on Friday left a death toll of 19.

The company pointed to its internal edicts to explain why it rebuffed calls to take down the video altogether. It did not meet its definition of hate speech, YouTube said, and so it allowed the video to stay up on the Web. It didn’t say very much more.

That explanation revealed not only the challenges that confront companies like Google but also how opaque they can be in explaining their verdicts on what can be said on their platforms. Google, Facebook and Twitter receive hundreds of thousands of complaints about content every week.

“We are just awakening to the need for some scrutiny or oversight or public attention to the decisions of the most powerful private speech controllers,” said Tim Wu, a Columbia University law professor who briefly advised the Obama administration on consumer protection regulations online.

Google was right, Mr. Wu believes, to selectively restrict access to the crude anti-Islam video in light of the extraordinary violence that broke out. But he said the public deserved to know more about how private firms made those decisions in the first place, every day, all over the world. After all, he added, they are setting case law, just as courts do in sovereign countries.

Mr. Wu offered some unsolicited advice: Why not set up an oversight board of regional experts or serious YouTube users from around the world to make the especially tough decisions?”

I personally have little confidence in some type of censorship committee given the many different cultures and sensitivities that exist on our precious planet.  Sengupta concludes:

“One of the challenges of the digital age, as the YouTube case shows, is that speech articulated in one part of the world can spark mayhem in another. Can the companies that run those speech platforms predict what words and images might set off carnage elsewhere? Whoever builds that algorithm may end up saving lives.”