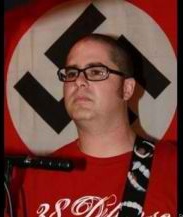 Wade Page, an Army veteran and a rock singer whose bands specialized in the lyrics of hate, has been identified as the gunman who took the lives of six people and wounded three others when he opened fire with a 9-millimeter semiautomatic handgun in a Sikh temple in Oak Creek, Wis., the police said. Officers then shot him to death.   The New York Times is painting a picture of a individual who had deep problems about race, minorities and “others”.

“To some who track the movements of white supremacist groups, the violence was not a total surprise. Mr. Page, 40, had long been among the hundreds of names on the radar of organizations monitored by the Southern Poverty Law Center because of his ties to the white supremacist movement and his role as the leader of a white-power band called End Apathy. The authorities have said they are treating the shooting as an act of domestic terrorism

Mark Potok, a senior fellow at the Southern Poverty Law Center, said Mr. Page had come to the center’s attention a decade ago because of his affiliation with rock bands known for lyrics that push far past the boundaries of tolerance.

“The music that comes from these bands is incredibly violent, and it talks about murdering Jews, black people, gay people and a whole host of other enemies,” Mr. Potok said. He added that in 2000, Mr. Page tried to buy unspecified goods from the National Alliance, which Mr. Potok described as a neo-Nazi organization that at the time was one of the country’s best organized and best financed hate groups…

But Mr. Potok said the center had not passed any information about Mr. Page to law enforcement.

“We were not looking at this guy as anything special until today,” he said. “He was one of thousands. We were just keeping an eye on him.”

Although little known among music fans, a steady subculture of racist and anti-Semitic rock bands has existed on the margins of punk and heavy metal in Europe and the United States since at least the 1970s. Hate groups sometimes use some of the bands and their record labels for fund-raising and recruiting, according to the law center and the Anti-Defamation League.

In an interview posted on the Web site of the record company Label56, Mr. Page mentioned going to Hammerfest, an annual white-supremacist festival well known to civil rights advocates. He also said he played in various neo-Nazi bands, including Blue Eyed Devils, whose song “White Victory” includes the lines: “Now I’ll fight for my race and nation/Sieg Heil!” The company removed the interview from its site on Monday.”

According to the SITE Monitoring Service, which follows white supremacist trends, Mr. Page had an extensive presence on Hammerskin and other white nationalist Web sites, including Stormfront, where he favored the names of his bands as user names and “frequently included white supremacist symbolism” in his postings. He concluded one posting with “88,” a number frequently used by neo-Nazis and skinheads to mean “Heil, Hitler,” according to SITE. (H is the eighth letter of the alphabet.) He also used “14,” the number of words in the rallying slogan of the white supremacist movement. “

Hate, violence, tragedy.  When will we learn? 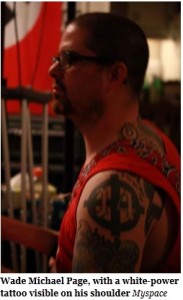