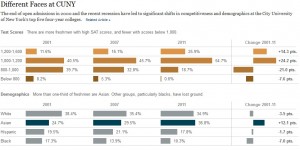 Since ending open admissions to its four-year colleges, a marked shift has occurred at CUNY’s top institutions as freshman classes now enter with far better academic credentials and also a different demographic mix.

According to a report by the Community Service Society of New York, and as reported in the New York Times:

“The changes began in 2000, with new minimum requirements for test scores for college admission, continued as academic standards were raised in stages over the years and accelerated sharply with the recent recession, as CUNY’s bargain prices beckoned far more applicants.

At the university’s five most competitive four-year colleges — Baruch, Brooklyn, City, Hunter and Queens — nearly 12 percent of freshmen entering in 2001 had SAT scores of 1,200 or more. In 2007, for the last prerecession class, the figure was up to 16 percent, and by last fall, it had jumped to 26 percent.

At the same time, black representation among first-time freshmen at those colleges dropped, to 10 percent last fall from 17 percent in 2001. Over the same period, the Hispanic share rose slightly for several years, then fell once the recession began, to 18 percent, while the white portion fell slightly, to 35 percent.

Asians are now entering the top colleges in the greatest numbers, composing 37 percent of those classes, up from 25 percent a decade earlier.

The ethnic changes at CUNY’s top colleges confirm the predictions made during the battle over ending open admissions, one of the city’s most charged political disputes of the 1990s: Proponents said the colleges would rise in status, while opponents said black and Hispanic enrollment would fall.

“We’re not condemning CUNY; we just don’t think they’ve taken into account the long-term effects of what’s happening,” said David R. Jones, the president and chief executive of the Community Service Society of New York, an antipoverty group, which has just completed a study of the changes. “If you’re taking a lower percentage of blacks and Latinos out of high school, you should try to make sure this doesn’t continue.”

Where students end up matters more than where they start, Dr. Goldstein said, adding, “We are graduating more black and Hispanic students than we ever have before.”

Across the country, the most selective public colleges have been growing more so for decades, with many of them seeing a notable shift in the past few years. The share of entering freshmen who were in the top 10 percent of their high school classes rose to 73 percent last fall from 69 percent in 2007 at the University of Texas at Austin, to 57 percent from 49 percent at Binghamton University and to 80 percent from 76 percent at the University of North Carolina at Chapel Hill, to name a few.”