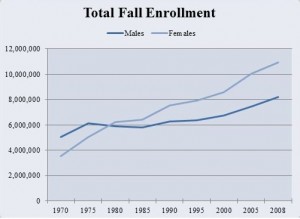 The college decision is one of the most critical decisions that most young Americans make. Institutional reputation, internships, jobs, scholarships, and the party atmosphere all factor into that decision.    Forbes Magazine is citing US Department of Education data indicating that the  male-female ratio in higher education continues in favor of the females.  Ever since the 1970s, total enrollment figures show that females outnumbered their male counterparts and they have steadily increased their numerical advantage ever since (see chart above). The superiority first came in public universities, but soon private universities saw female enrollment surpass male enrollment.

“On a national scale, public universities had the most even division between male and female students, with a male-female ratio of 43.6–56.4. While that difference is substantial, it still is smaller than private not-for-profit institutions (42.5-57.5) or all private schools (40.7-59.3). The nearly 40-60 ratio of private schools was most surprising, though perhaps this is partly due to the fact that most all-female schools are private. Nevertheless, the female domination of higher education prevails across all types of schools. It should also be noted that the national male-female ratio for 18-24 year olds is actually 51-49, meaning there are more (traditionally) college-aged males than females.”

I would offer that this trend relates directly to K-12 indicators such as high school drop-out rates where males outnumber females substantially especially among minority populations.