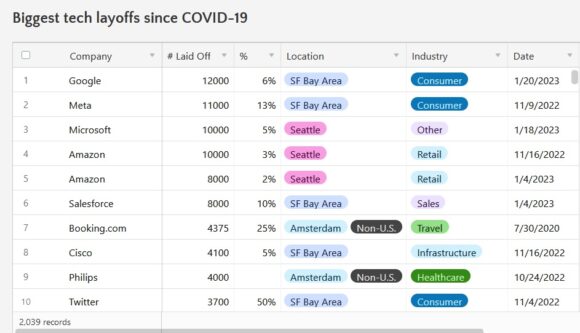 While last year’s labor market was remarkably strong, the tech industry was an exception.

After a massive hiring spree in the first two years of the pandemic, industry giants like Amazon and Meta reversed course in 2022. There were at least 154,000 layoffs from more than 1,000 tech companies last year, according to Layoffs.fyi, a website that has been tracking tech layoffs since March 2020. “The number of actual layoffs is going to be much higher than what’s on the site just because most layoffs don’t get reported,” Layoffs.fyi creator Roger Lee told USA TODAY. “Unfortunately, I don’t see the layoffs going away anytime soon.”

Google’s parent company Alphabet, announced yesterday that it  is slashing an estimated 12,000 jobs, marking the latest round of sweeping layoffs to strike the technology industry.

CEO Sundar Pichai informed workers about the staff reductions in an email that was also shared on the company’s news blog. The jobs being shed “cut across Alphabet, product areas, functions, levels and regions,” he said.

The “roles we’re eliminating reflect the outcome” of a “rigorous review,” the CEO said. The cuts will reduce the company’s workforce by about 6%.

“The fact that these changes will impact the lives of Googlers weighs heavily on me, and I take full responsibility for the decisions that led us here,” Pichai said.

Laid-off staff will receive severance starting at 16 weeks salary plus two weeks for every additional year at Google. They will also receive six months of health care, job placement services and immigration support if needed.

Pichai cited the changing “economic reality” in announcing the layoffs. He specifically pointed to the surge in online activity triggered by the COVID-19 pandemic, which has waned in the months since lockdowns were lifted.

“As an almost 25-year-old company, we’re bound to go through difficult economic cycles.” he told employees. “These are important moments to sharpen our focus, reengineer our cost base, and direct our talent and capital to our highest priorities.”

Pichai added: “Being constrained in some areas allows us to bet big on others.”

The announcement comes just days after Microsoft announced 10,000 job cuts, or a nearly 5% reduction of its workforce. Facebook parent company Meta is shedding 11,000 positions, or 13% of its workers, while business software maker Salesforce is slashing about 8,000 employees, or 10% of its staff.

New Twitter CEO Elon Musk reduced the social media company’s workforce by nearly 50% upon acquiring the company back in October. This translated to about 3,700 jobs lost. Amazon has also announced it will cut 18,000 of its 1.5 million jobs.

This surely hurts in a business sector that had been doing so well even during the pandemic.