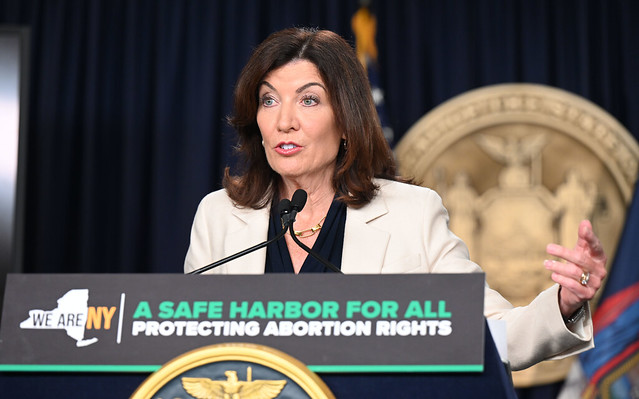 New York Governor Kathy Hochul is pressing the state’s public colleges and universities to make abortion pills available to students — a measure that has been stalled in the legislature since 2019.

Hochul, who outlined her plans on Tuesday in her 2023 State of the State, said she would ensure all colleges and universities in the State University of New York and City University of New York systems either offer abortion pills at student health centers or form relationships with local reproductive health care providers to refer students.  As reported by the New York Daily News.

“Knowing the struggle that is accessing reproductive care on campuses,” said Nihakira Rao, co-founder of the student advocacy group the Reproductive Justice Collective, “there’s a difference between something being legal and something being truly accessible.”

Hazel Crampton-Hays, a spokeswoman for the governor, said the proposal “can either be done administratively by these respective institutions or legislatively.”

Spokesmen for both systems indicated they would work with the governor to ensure access to reproductive health care. The rep for CUNY added that all health centers have practitioners who can at minimum prescribe the pills or make referrals to nearby providers.

A bill in Albany to offer abortion medication on public college campuses, proposed in 2019, was still in committee at the end of last session. It originally just applied to SUNY, but was expanded to include CUNY last year, according to Assemblyman Harvey Epstein, its sponsor in the chamber alongside State Sen. Cordell Cleare.

Epstein estimated the directive could include $5 million in state funding to support the schools that do not yet have the infrastructure or resources in place, mostly community colleges.

The governor’s upcoming executive budget will include additional policies and funding details related to the proposal, the spokesperson confirmed.

Student advocates see improving abortion access on campus as vital after the Supreme Court overturned the constitutional right to abortion in June — leading some states to enact near-blanket bans and their residents to seek reproductive health care elsewhere in places like New York.

Brigid Alliance, a service that provides logistical support for people traveling to abortions, has reported a 60% increase in clients coming from those states to New York.

“What medication on campus does is students don’t have to experience delays and wait times, which can go into weeks,” said Rao, a senior at Barnard College, adding that abortion pills are only prescribed for the early weeks of pregnancy. “That week-long delay can mean a difference in the procedure you can have access to.”

Rao added that students seeking getting their health care needs met on campus can reduce the load on clinics for the general public.

Plus, many of the clinics have become hotspots for clashes with abortion opponents, according to Hennessy Garcia, a student at CUNY Medgar Evers College in Crown Heights — who as a member of NYC for Abortion Rights counters protesters at Planned Parenthood in SoHo. Having access on campus could help students avoid those confrontations.

“It would definitely reduce fear among students,” said Garcia, who also organizes with the Reproductive Justice Collective.

Students can also face barriers to abortion related transportation, prohibitive costs or trouble navigating student health insurance coverage. Some colleges limit the number of students allowed cars on campus, and the New York school furthest from a clinic is more than 68 miles away, the advocacy group found.