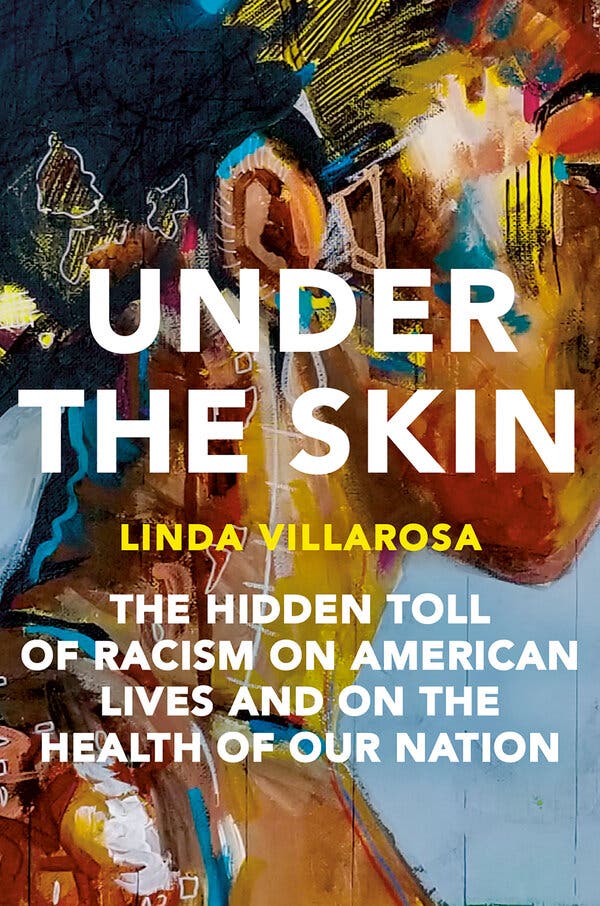 I have just finished reading Linda Villarosa’s Under the Skin:  The Hidden Role of Racism  on American Lives and on the Health of Our Nation.  Villarosa is a writer for The New York Times Magazine and has contributed to The 1619 Project.  She is also a professor of journalism here at the City University of New York.  The focus of Under the Skin is how racism is a driving force in this country for the low levels of health care available to Black Americans.  She states:  “The United States has the most advanced medical technology in the world and spends more on health care than any other country, yet the health outcomes of Black Americans are by several measures on  par with those of people living in poor countries.”  She backs up her claim with heart-wrenching case studies of individuals, most of whom succumb because they are they unable to get adequate health care. The New York Times Book Review lists Under the Skin as one of the best works of non-fiction in 2022.  I thought it was a good book and it grew on me as I got deeper into it.

The Roots of Black Pain in America

UNDER THE SKIN: The Hidden Toll of Racism on American Lives and on the Health of Our Nation, by Linda Villarosa

In 1973, two Black girls, 14-year-old Minnie Lee Relf and her 12-year-old sister, Mary Alice, were forcibly taken from their home in Montgomery, Ala., and sterilized at a clinic funded by the federal government. Their parents — who had been displaced from rural Alabama into a cardboard shanty in the city and could not read or write — were tricked into agreeing to the procedure. Two years earlier, doctors had already begun to inject their oldest daughter, 15-year-old Katie, with the Depo-Provera contraceptive, then unapproved even for adult women, never mind teenagers.

Jessie Bly, a Black social worker who had brought the Relf family to the state’s attention the year before, recalled the horror of discovering what the state’s own doctors had done to the girls. Interviewing Bly for her remarkable third book, “Under the Skin,” Linda Villarosa writes: “Even nearly half a century later, Bly has no trouble conjuring the image of the younger Relf girls in the hospital, huddled together, looking small and scared in cotton surgical gowns.” At the sight of Bly, they began to cry. Mary Alice, who was born with a developmental disability, could only say: “I just hurt so bad. I just hurt so bad, Miss Bly, help me. Help me, Miss Bly.”

I am writing this review the week after the Supreme Court’s draft ruling to overturn Roe v. Wade was leaked. In the days since, some women and activists on social media have predicted that “‘The Handmaid’s Tale’ will become a reality,” conveniently forgetting that it already has been for generations of American women who are not white.

How this country understands birth, personhood and privacy — why its laws even presume to dictate what happens during an individual pregnancy — is deeply rooted in slavery. A couple of hundred years ago, the reproductive health of enslaved Black people literally decided the state of this country’s economy: More Black women able to bear more Black children meant that the plantation economy could prosper. But of course, the system of slavery — and the doctrine of anti-Blackness that sprang up to philosophically justify it — was predicated on inhumane physical, sexual and emotional violence. This entanglement of incentives left a cruel legacy that continues in today’s shocking racial health disparities. Through case histories like the Relfs’ story and the better-known Tuskegee experiment, as well as her independent reporting across the country, Villarosa elegantly traces the effects of this legacy on Black health: reproductive, environmental, mental and more.

Villarosa opens the book with a long personal history of her awakening to these structural inequalities. She was raised in an upwardly mobile Black family that moved from an all-Black neighborhood in Chicago to a white suburb in Colorado when she was a child. She often felt “like a fly in the buttermilk,” she writes, acutely aware of her imperative, as a representative of her race, to help other, poorer Black people. She began her career as a health journalist at the bible of Black women’s bougie ambitions, Essence magazine. The job required her to break down complex scientific and clinical reports into narratives for a general reader. That underrated skill serves Villarosa well in this book, where she repositions various narratives about race and medicine — the soaring Black maternal mortality rates; the rise of heart disease and hypertension; the oft-repeated dictum that Black people reject psychological therapy — as evidence not of Black inferiority, but of racism in the health care system.

A disciple of the gospel of racial uplift, Villarosa implicates herself as one of many well-meaning professionals who assumed that the “problem” of Black health must simply be a matter of education and class. If only poor Black people paid better attention, she once assumed, they would be healthier. In 1994, Villarosa wrote “Body & Soul: The Black Women’s Guide to Physical Health and Emotional Well-Being,” pitched as an African American “Our Bodies, Ourselves.” Angela Y. Davis and June Jordan wrote the foreword to the book. They “had been involved in the civil rights and Black Power movements and understood that structural racism and health care discrimination contributed greatly to the health problems that ‘Body & Soul’ covered,” Villarosa writes. “But as a child of the generation that benefited from earlier struggles but was too young to be involved in the movements, I stayed in my sweet spots — information, education and self-help.”

It is not until a 1991 encounter with Harold Freeman, the head of surgery at Harlem Hospital, that Villarosa begins to rethink this approach. Freeman had recently published a groundbreaking and explosive report in The New England Journal of Medicine that found that “Black men in Harlem lived fewer years than their counterparts in the impoverished country of Bangladesh.” Visiting Harvard during Villarosa’s fellowship there, Freeman admonished her: “If you really care about these issues and want to make a difference, you must not use race as a proxy for poverty or poverty as a proxy for race. … Look deeper, think differently.” Even as she took these words to heart, it would take decades for Villarosa to truly internalize them. This new approach finally came to a head in 2018, with Villarosa’s own groundbreaking reporting on the Black maternal health crisis, told through the experience of Simone Landrum, “a woman whose medical treatment led to the death of her baby and her own near death.” Published in The New York Times Magazine (where she has been a contributing writer since 2017), “Why America’s Black Mothers and Babies Are in a Life-or-Death Crisis” made an immediate public impact, inspiring a slew of conferences, initiatives, further articles and testimonies, and culminating in a 2020 executive order by the governor at the time, Andrew Cuomo, requiring all New York hospitals to allow “support people,” i.e. doulas, in delivery rooms. The story formed the seed of this singular and expansive book on the racism of American health care.

But despite this wide influence, Villarosa felt the limits of this country’s understanding. I, along with almost every other Black woman of childbearing age I knew, read the piece and talked about it constantly. Trapped in the American narrative of individualism, I took the same ineffectual lessons from it that Villarosa had espoused at Essence: “to work within the medical system and squeeze everything you could” out of it, not to “challenge that system” but to “self-advocate for fair treatment.” I did all this during my own pregnancy, with Landrum’s story at the front of my mind. I took prenatal vitamins religiously; I followed doctor’s orders even when they suggested I should lose weight during my pregnancy; I hired a doula, and found a doctor who looked like me, and chose a hospital renowned for its low rate of cesarean sections. I still ended up in the hospital for a week before my daughter’s birth — a traumatizing time marked by painful medical interventions that I sometimes feel I am still coming to terms with. I had done everything, had “cared enough” in the face of everyone telling me Black mothers didn’t care. Instead of recognizing the external factors of my suffering, I internalized it into shame.

“Under the Skin” offers an alternative understanding of this suffering, for which there is a long history. Black pain is not, and has never been, the fault of the individual, but a result of the structural racism embedded in the practice of medicine in this country. Many doctors avoid confronting this truth. Hearing Villarosa’s account of Landrum’s harrowing delivery, a group of white Midwestern doctors only questioned why Villarosa was allowed in the delivery room at all. “That was your takeaway?” she replied. “The denial of racial bias can be so extreme that no one believes you even when you have the evidence.”

In this eminently admirable book, there are no easy answers or platitudes. Even as Villarosa meticulously outlines the myriad ways Black people have fought for their own health, from social workers to doulas to community organizers, she stays focused on the nature of a structural problem, which cannot be changed through individual choices. In 1992, Villarosa asked Audre Lorde if she agreed that racism in America was “dying out.” In response, Lorde “warned me that when something dies, it doesn’t just fade away; it fights to the death, desperately clinging to life, and goes out ugly.” If racial bias in medicine is receding, Villarosa concludes, it’s certainly “going out ugly.”