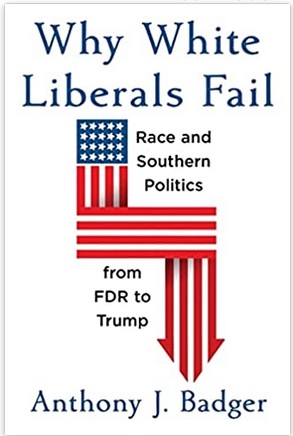 I just finished reading Anthony J. Badger’s  new book:  Why White Liberals Fail:  Race and Southern Politics from FDR to Trump.  Badger is a British historian and professor of American history at Northumbria University.  Formerly he was a professor at the University of Cambridge.  This book is based on a series of lectures he gave at Harvard University in 2018. Badger looks at major Democratic leaders such as FDR, Carter, and Clinton who put their faith in policies that would be engines of social change and mobility. He concludes that these Democrats failed because of their reluctance to confront directly the “explosive racial politics dividing their constituents”.  It is a quick read at 250 pages but has an important message that resonates about politics and race in our country.  Below is a brief review published in The New York Times.

WHY WHITE LIBERALS FAIL: Race and Southern Politics from FDR to Trump

Reviewed by James Goodman, a professor of history and creative writing at Rutgers University, Newark

The Democratic Party coalition that put Roosevelt and his heirs in office included working-class Americans, Black and white. That coalition broke down during the upheavals of the 1950s and 1960s, beginning with the civil rights movement, as white working-class voters began to drift away. Progressives dream of rebuilding it, appealing to shared economic interests across racial lines. WHY WHITE LIBERALS FAIL: Race and Southern Politics from FDR to Trump (256 pp., Harvard University Press, $27.95), Anthony J. Badger’s analysis of liberal white Southerners since the 1930s, suggests how difficult it is going to be to bring the white working class back into the fold.

Badger, a British historian, writes about several dozen educators, journalists and elected officials who saw economic development as the way out of the hole the South was in. Men like Frank Graham, William Winter, Albert Gore Sr., Fritz Hollings and Terry Sanford embraced the New Deal, the Fair Deal, the War on Poverty and every iteration of the “New South.” Badger identifies promising moments in several decades, including (after the passage of the Voting Rights Act of 1965) successful biracial electoral coalitions. Yet today there are fewer white Democrats in the South than ever.

Why? The historical literature is rich, and the answer is usually race. White liberals failed because they championed, or were associated with, civil rights. But in this volume, based on the Huggins lectures he delivered at Harvard in 2018, Badger finds that explanation unsatisfying. His subjects downplayed race. They championed infrastructure, education and social services they believed would benefit all.

They failed nonetheless, for many different reasons. One is that before the 1960s any Southerner who was not a rabid segregationist was considered a racial radical. Another is that in the half-century since, significant numbers of white Southerners have opposed government programs that would have improved their lives — universal health care, for example — if they thought liberals designed those programs with Black people in mind.

Badger runs from race, and racism, as explanations, but as he himself concedes, he never gets far.