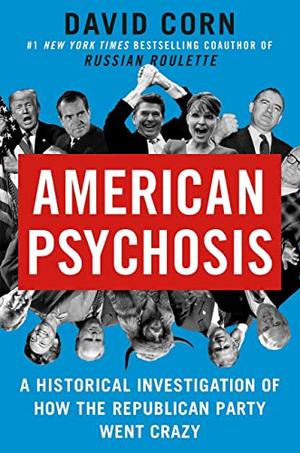 I just finished reading David Corn’s new book, American Psychosis: A Historical Investigation of How the Republican Party Went Crazy.  It is a review of the Republican Party’s performance during the last seven decades and examines the influences of the likes of Senator Joe McCarthy, Barry Goldwater, Newt Gingrich, Rush Limbaugh, Sarah Palin and of course, Donald Trump.  Corn covers a lot of ground that has been covered before.  For example, he quotes Jerry Falwell as saying:  “ I am to the right of wherever you are.  I thought Barry Goldwater was too liberal.”  Corn is a New York Times best-selling author and knows how to weave the stories of the “dark forces” and the individuals who had great influence on the ultra-conservative path that the GOP has taken.  I found it a good book not necessarily a great book.  Below is a brief review published in Kirkus.

A HISTORICAL INVESTIGATION OF HOW THE REPUBLICAN PARTY WENT CRAZY

The veteran political journalist connects the authoritarianism and White supremacism of yore with the Trumpism of today.

At the 1964 Republican National Convention, liberal Republicans tried to introduce a resolution to condemn the extremism of the John Birch Society and Ku Klux Klan and were shouted down by supporters of Barry Goldwater, who said that “extremism in the defense of liberty is no vice.” Corn’s vivid narrative starts there, but it goes back much further, to the anti-immigrant Know-Nothingism of the 1850s, where the author locates the beginnings of a recurrent theme: Just as Abraham Lincoln could not disavow the nationalists because he needed their vote, Richard Nixon had to ally with racist Southerners, and George W. Bush had to pal around with Christian fundamentalists to win the 2000 primary against a more principled John McCain. In turn, McCain turned to Sarah Palin to placate far-right, tea party supporters, a group that morphed into the Trumpists of today. It’s a zigzag line indeed, but Corn makes important connections. “Nixon attained the presidency by exploiting the paramount divisive force in American society—racism—and the sense of fear and dread spreading through much of the nation,” he writes, and substituting Trump for Nixon makes that sentence scan without a hitch. Much of the “psychosis” of recent years has hinged on a long pattern of lies. While the author makes clear that Trump is master of the form, he had plenty of predecessors, from Joseph McCarthy to Palin’s winking insinuations that Barack Obama was a Muslim, the latter yielding what Corn calls Palinism, “a combination of smear politics, conspiracism, and know-nothingism.” Since then, it’s only gotten worse. “Formed 168 years earlier to save the nation from the expansion of slavery,” writes the author, “the Republican Party, now infected with a political madness, [is] a threat to the republic.”

A sobering look at the ideological destruction, born of cynicism and opportunism, of a once-principled party.