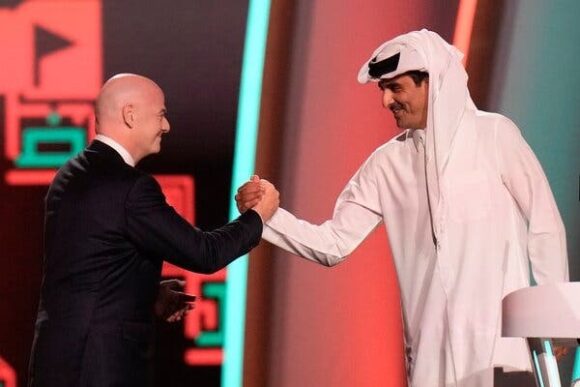 Gianni Infantino, the president of world soccer’s governing body on Saturday sought to blunt mounting concerns about the World Cup in Qatar with a strident defense of both the host country’s reputation and FIFA’s authority over its showpiece championship.

In pushing back against criticism of the event, particularly from Europe,Infantino, seemed to revel in redirecting much of that anger toward himself.

In an extraordinary  soliloquy delivered in a grand auditorium one day before the opening game of the World Cup, Infantino attacked Western critics of Qatar, Western companies who do business in the country and human rights groups and news media organizations who have highlighted the cause of migrant workers.

All of them, he said, had engaged in what he labeled “moral lesson-giving” and “hypocrisy.” Citing statistics, history and even childhood to bolster his case, he at one point likened his own experience as a redheaded child of immigrants to Switzerland to the assimilation problems of gay people in the Middle East, and defended the laws, customs and honor of the host country.

“You want to criticize someone, come to me,” Infantino said. “Criticize me. Here I am. Crucify me,” he added, rising in his seat and extending his arms out wide.

In meandering remarks tinged by scorn and false equivalencies, Infantino also sought to reassure gay fans and others that they would be welcome and safe in the tiny Gulf state; pushed back against growing evidence that Qatar, and not FIFA, was in control of major decisions related to the tournament; and defended the last-minute decision by local organizers on Friday to ban the sale of beer at the tournament’s eight stadiums.

“I think personally, if for three hours a day you cannot drink a beer, you will survive,” Infantino said dismissively. There were still dozens of other locations around the country, he pointed out, where as many as 100,000 people could be served alcohol at any one moment.

But he also spent a significant portion of his address defending Qatar’s treatment of migrant laborers, the workers hired from some of the poorest corners of the planet to rebuild the desert state in a decade-long buildup to the first Arab World Cup. Thousands of workers have died in that period, according to human rights groups, after working long hours in intense heat and other harsh conditions. Qatar has repeatedly disputed those death tolls, and has defended itself by noting it has changed laws and instituted reforms to improve workers’ lives.

Given that, Infantino branded criticism of Qatar’s treatment of immigrants as “hypocrisy” and “moral lesson-giving” from a part of the world that should remember its own history.

“I think for what we Europeans have been doing around the world for the last 3,000 years, we should be apologizing for the next 3,000 years, before starting to give moral lessons,” Infantino said.

His performance may have been helpful to his Qatari hosts, though, in that it shifted the World Cup’s conversation away from them, and from far more difficult topics.

Infantino had come prepared, surprising the hundreds of journalists who had gathered expecting a 45-minute news conference filled with familiar talking points. Instead, reading from notes on the table, Infantino began his monologue with a tone and language that set up what was to follow.

“Today I have very strong feelings, I can tell you that,” he said. “Today I feel Qatari. I feel Arab. I feel African. I feel gay. I feel disabled. I feel a migrant worker.”

He then tackled one issue after another, expressing his irritation at how, in his mind, the reality of life in Qatar was far different from what was in the pages of newspapers, which he made a point of saying he ignored.

He insisted fears over the treatment of LGBTQ+ people attending the World Cup were overstated, and repeatedly said they were welcome in Qatar even though homosexuality remains criminalized in the country.

“Everyone’s security is guaranteed, from the highest level of government,” Infantino said. “This is the guarantee we’ve given, and we stick with it.”

He then sought to play down Friday’s abrupt U-turn on the availability of beer at stadiums, a last-minute change that shocked the longtime FIFA partner most affected by it, Budweiser. Far from souring that relationship, Infantino insisted, the sudden rupture had in fact strengthened the relationship with the brewer.

He offered no evidence to support his claim, one day after Budweiser had released a statement that seemed to grudgingly accept a decision — made in consultation between Qatar and FIFA, Infantino insisted — that was out of their control.

That sudden reversal of years of promises by tournament organizers had raised questions about FIFA’s authority of its own event, with the beer ban being demanded by the most senior Qatari royals. Infantino, however, insisted that all decisions, even those made late, and apparently influenced by royal fiat, were made jointly.

Infantino hinted darkly about what underpinned the sudden change of heart on beer, blaming the move on “threats that were not known before.” His comments also underlined concerns about Qatar’s suitability to host such a large event: With four games per day in the opening group stage, all played in what is effectively a single city-state, Infantino said the movement of large groups of fans within such a compact environment carried greater risks if they were fueled by beer.

Asked about the appropriateness of his language. Infantino remained unapologetic, doubling down whenever he was pressed to explain himself.

The remarkable 90-minute curtain-raiser ended with the unexpected intervention of FIFA’s director of communications, who in defending Infantino’s inclusion efforts revealed that he was gay.

Having spent an hour and a half in the role of lightning rod for his hosts, Infantino let that be the last word. Besides, he had already hit all the points he wanted to make, offering all the defenses that he said they did not need.

“I don’t have to defend Qatar,” he said. “They can defend themselves.”