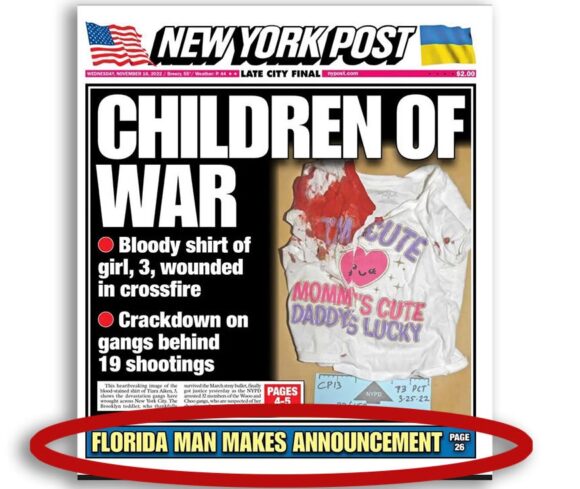 The New York Post blistered Donald Trump yesterday, burying the launch of his 2024 White House bid on page 26 of the former president’s favorite tabloid.  The Rupert Murdoch-owned newspaper derisively referred to Trump as “Florida Man” on its cover, teasing the launch — which was held at Trump’s Mar-a-Lago resort in Palm Beach, Fla., on Tuesday night — at the bottom of the front page with the headline “Florida Man Makes Announcement.”

Inside, a brief column attributed to Post staff was dripping with sarcasm.

“With just 720 days to go before the next election, a Florida retiree made the surprise announcement that he was running for president,” the column began. “In a move no political pundit saw coming, avid golfer Donald J. Trump kicked things off at Mar-a-Lago, his resort and classified-documents library.

“Trump, famous for gold-plated lobbies and for firing people on reality television, will be 78 in 2024,” it continued. “His cholesterol levels are unknown, but his favorite food is charred steak with ketchup.”

But those formerly Trump-friendly outlets have soured on him in the wake of the lackluster showing by Republicans in last week’s midterm elections. And each took turns blaming him for the GOP’s dismal performance.

“Ron DeSantis is the new Republican Party leader,” Fox News said in an online editorial after the Florida governor secured a resounding reelection victory ahead of his own looming decision about whether to run for president in 2024.

“The biggest winner of the midterm elections was, without a doubt, Governor Ron DeSantis,” the editorial read. “The biggest loser? Donald Trump.”

“Trump Is the Republican Party’s Biggest Loser,” the Wall Street Journal declared in a blistering editorial.

Trump must be going nuts seeing how Rupert Murdoch’s news outlets are treating him!