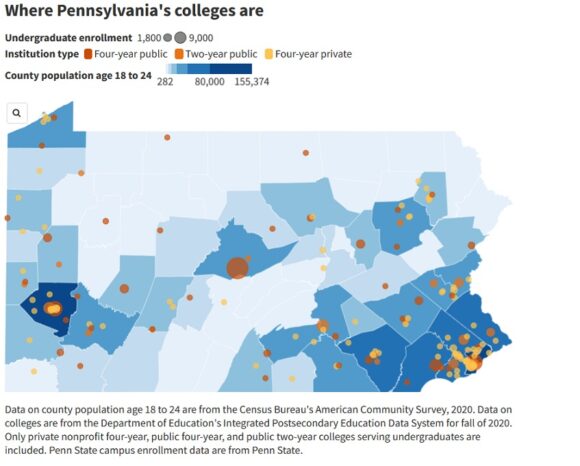 The Chronicle of Higher Education this morning has an article begging the question of whether Pennsylvania has too many college campuses given the size of it student population. This comes after Pennsylvania’s State System of Higher Education (Passhe) recently consolidated six of its campuses into two after a decade of low enrollments enrollment and financial pressures. The article makes the point that while some factors — like declining enrollment, anemic state investment, and a dwindling pipeline of high-school graduates — affecting institutions in the Keystone state are also common elsewhere, there’s also a distinctly Pennsylvanian force at play: The state has a large number of colleges relative to its traditional-age student population.  Here is an excerpt.

A Chronicle analysis of the higher-ed landscape in Pennsylvania reveals that 149 four-year public, four-year private, and two-year institutions served undergraduates in 2020. That’s 7,570 18- to 24-year-old Pennsylvanians for every college.

In comparison, two states that share Pennsylvania’s borders have more 18- to 24-year-olds per college, which roughly translates to a less-crowded landscape. (The more people there are per college, the less crowded the landscape is with institutions.)

“We’re in a state with a very large private sector of higher education, so the competition for students is fierce, with a declining number of Pennsylvanians,” said Joni Finney, former director of the Institute for Research on Higher Education at the University of Pennsylvania.

More than 60 percent of the institutions in The Chronicle’s analysis are four-year private nonprofit colleges. Of this group, more than 72 percent derive at least half of their freshman class from within the state. About three institutions in 10, in The Chronicle’s sample, are four-year public colleges. The rest are community colleges. (For-profit, two-year private, and graduate-student-only colleges were excluded from the analysis).

Two-thirds of Pennsylvania’s counties are home to at least one college. The top three counties by number of colleges are among the state’s most populous. Philadelphia County has 16 institutions; Montgomery County, adjacent to Philadelphia, has 12; and Allegheny County, dominated by Pittsburgh, has 11.

This situation is not sustainable and will likely lead to further consolidations in the future.