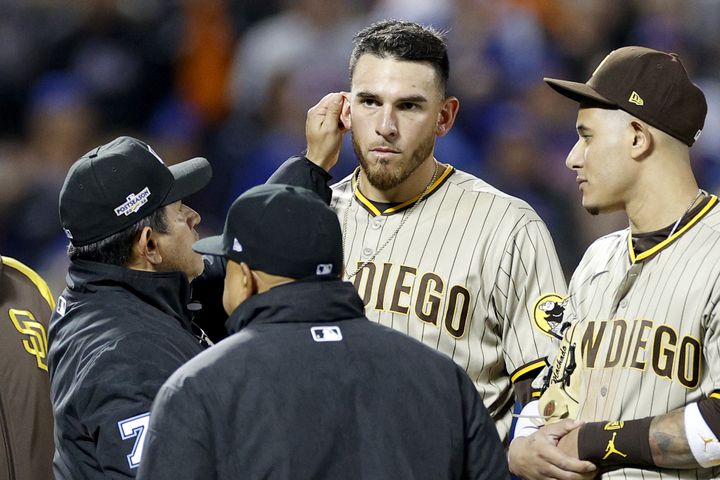 Umpire Alfonso Marquez checks the ear of Joe Musgrove of the San Diego Padres during the sixth inning against the New York Mets in game three of the National League Wild Card Series. (Photo by Sarah Stier/Getty Images)

Last night, the New York Mets lost their wild card playoff series against the San Diego Padres but Met manager  Buck Showalter stole the show when he asked the umpires to check San Diego pitcher Joe Musgrove’s ears for whether he was using a foreign substance to doctor the baseball.

To be fair to Showalter,  Musgrove’s ears were glistening with what looked like more than just sweat.

The umps stopped the game and gathered around the mound. Umpire Alfonso Marquez checked out Musgrove’s hat, glove… and ears but found nothing and play continued.

After the game, Showalter was unapologetic, saying the team is “privy” to more information, that he “loves” Musgrove as a pitcher and that he feels “kind of bad about it,” according to the LA Times.

“I’m charged with doing what’s best for the New York Mets,” he said. “If it makes me look however it makes me look or whatever, I’m going to do it every time and live with the consequences.”

One of the more immediate consequences was this reaction from Musgrove after he got out of the inning:

“I mean, I get it dude,” Musgrove said after the game. “They’re on their last leg, they’re desperate. They’re doing everything they can to get me out of the game at that point. It is what it is.”

It wouldn’t be the first time Musgrove was part of a cheating club: He was on the infamous 2017 Astros, which used an elaborate ― and illegal ― sign-stealing scheme as they ultimately won a World Series that even Musgrove himself isn’t proud of.

“I still don’t feel great about wearing that ring around or telling people that I was a World Series champion on that team,” he admitted to the Associated Press last week. “I want one that feels earned and that was a true championship. So that’s the goal.”

He ultimately threw seven innings, giving up just one hit and a walk while recording five strikeouts as the Padres won 6-0 to advance to the next round.

Congratulations to the Padres.  The Mets have next year!