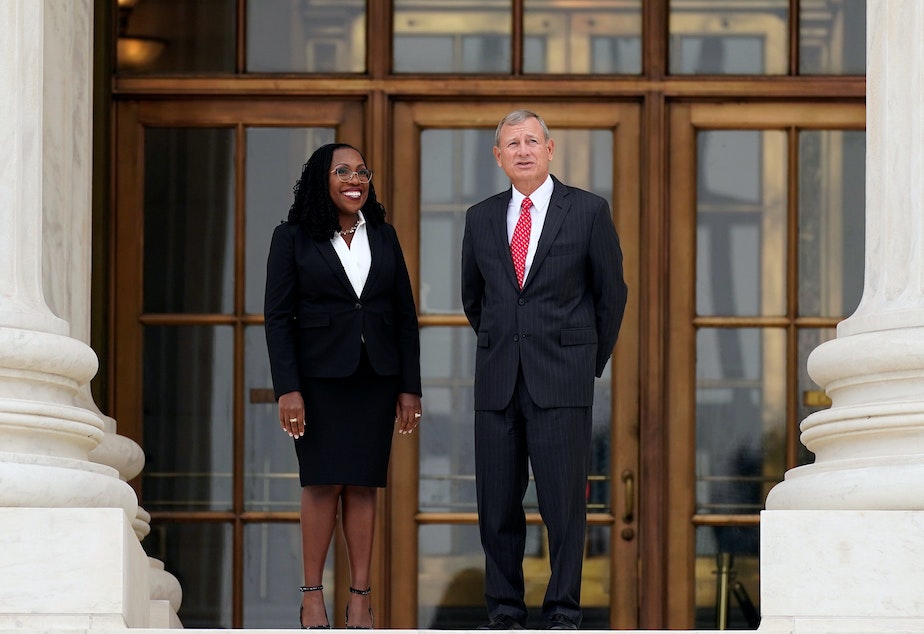 Justice Ketanji Brown Jackson, the first Black woman to serve on the Supreme Court, was formally welcomed by her colleagues yesterday at an investiture ceremony at the court that was attended by President Biden and Vice President Kamala Harris.

The proceedings were “purely ceremonial,” the court’s public information office noted, as Justice Jackson has been a member of the court since she was sworn in on June 30. But the event was nonetheless stately and steeped in history.

The courtroom was filled with supporters and dignitaries, among them Nancy Pelosi, the speaker of the House of Representatives, and two retired members of the court, Justices Anthony M. Kennedy and Stephen G. Breyer. Justice Jackson was once a law clerk to Justice Breyer and succeeded him after he stepped down on the last day of the term that ended in June.

Chief Justice John Roberts administered the judicial oath, and Justice Jackson promised to “administer justice without respect to persons, and do equal right to the poor and to the rich.” She took her seat on the far right side of the bench.

The chief justice wished his new colleague “a long and happy career in our common calling.” The ceremony lasted only a few minutes.

Chief Justice Roberts and Justice Jackson then walked down the front steps of the courthouse, chatting out of earshot as photographers captured the scene. Her husband, Dr. Patrick G. Jackson, joined them at the base of the steps. As reported by The New York Times.

In recent public appearances, two members of the court have reflected on the significance of the arrival of a new colleague. At a judicial conference in September, Chief Justice Roberts said that “what it causes the rest of us to do is kind of up our game a little bit,” adding: “It’s almost like the new in-law at Thanksgiving dinner.”

The other eight justices have a good idea of what they each think about given legal issues, the chief justice said. “But now there is a new person there,” he said. “And I think each of us will be a little more careful in explaining why we think what we think.”

He added that Justice Jackson was a welcome addition. “She’s going to be a wonderful justice, has a delightful family, and I’m really looking forward to working with her,” Chief Justice Roberts said.

Justice Elena Kagan, in remarks in September at Salve Regina University in Rhode Island, said she once had her doubts about an oft-quoted remark from Justice Byron White that every time there is a new justice “it’s a different court.” (“Literally every journalist pulls out this line when there’s any new justice,” she said, with some justification.)

Justice Kagan added that she had come to realize that the adage was in a different sense “deeply true”: “It wasn’t the addition of the new justice. It was actually the fact that the old justice was no longer there.”

Justice Breyer, who served for more than 27 years, was a beloved figure at the court, she said.

“I’m sure Justice Jackson will be a fantastic colleague and a fantastic judge,” Justice Kagan said, but she added that Justice Breyer would be hard to replace.

“It didn’t always work,” she said. “Not in every case, and not every year. But there was something quite magnificent and really good for the court in having somebody who would just come back and do the same thing again and again.”

Justice Jackson will hear her first arguments on Monday at the start of a term that includes major cases on affirmative action, voting, free speech and gay rights.

We wish her wisdom in all her deliberations on the court!