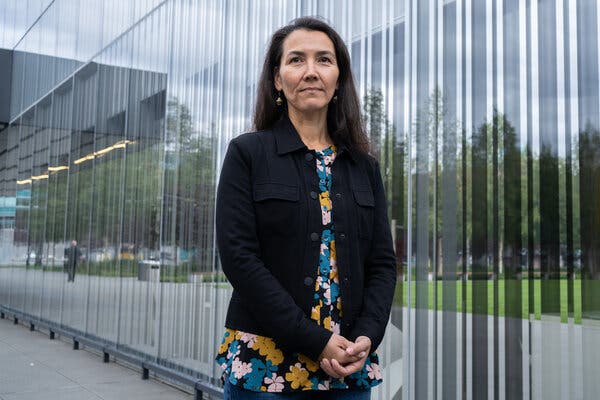 Democrat Mary Peltola, a former state representative, will be the first Alaska Native in Congress after she won a special election that included GOP candidates Nick Begich and former Gov. Sarah Palin.

Peltola, who is the executive director of the Kuskokwim River Inter-Tribal Fish Commission, served 10 years in the state Legislature and campaigned as “Alaska’s best shot at keeping an extremist from winning.”   As reported by NBC News.

“It is a GOOD DAY,” Peltola tweeted following the election results. “We’ve won tonight, but we’re still going to have to hold this seat in November.”

House Speaker Nance Pelosi, D-Calif., lauded Peltola for “making history as the first Alaska Native ever elected to the Congress.”

“Her valuable and unifying perspective, deep experience in public service and commitment to working families will strengthen the work of our Caucus and the Congress,” Pelosi said in a statement.

Peltola finished fourth in a crowded nonpartisan primary in June, when 48 candidates battled to secure one of the four spots on the Aug. 16 special election ballot. But heading into Wednesday’s final tabulation, Peltola was leading the pack.

The special election was the state’s first test of ranked-choice voting, which was implemented after a 2020 ballot measure. The same system will be used in November.

Voters cast their ballots more than two weeks ago to determine who will serve out the final four months of Young’s term after he died in March at age 88.

No candidate won more than 50% of the vote in the Aug. 16 election, which triggered runoffs under the new system, in which voters ranked the candidates in order of preference.

Palin, the GOP’s vice presidential candidate in 2008, will have another chance at reviving her political comeback. She will compete against Peltola and Begich again in November to determine who will serve a full two-year term in the House. The three candidates received the most votes in the primary; the fourth qualifying candidate, independent Al Gross, later dropped out of the race.

“Ranked-choice voting was sold as the way to make elections better reflect the will of the people. As Alaska — and America — now sees, the exact opposite is true,” she said in a statement. “Though we’re disappointed in this outcome, Alaskans know I’m the last one who’ll ever retreat. Instead, I’m going to reload.”

Begich on Wednesday congratulated Peltola and went after Palin, saying she “cannot win a statewide race because her unfavorable rating is so high.”

“The biggest lesson as we move into the 2022 General Election, is that ranked choice voting showed that a vote for Sarah Palin is in reality a vote for Mary Peltola. Palin simply doesn’t have enough support from Alaskans to win an election,” Begich said in a statement. “As we look forward to the November election, I will work hard to earn the vote of Alaskans all across the state.