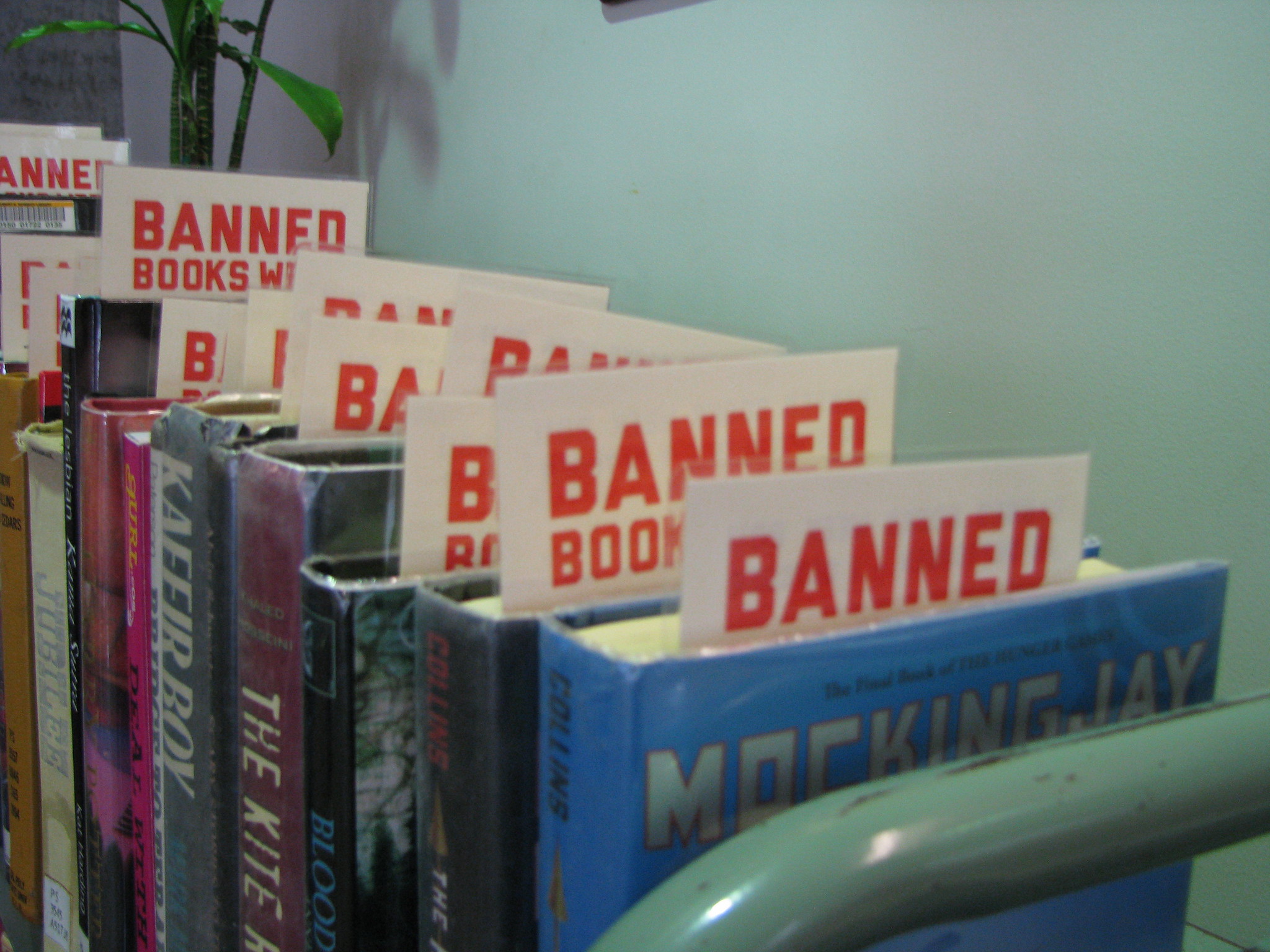 There is a history of book-banning in the U.S. but right-wing groups are emboldened like never before, and they’re taking their mission to a new level. The Huffington Post had an article yesterday reviewing recent activities of ultra conservative attempts to limit what appears on public library shelves.  Here is an excerpt:

“In Jamestown, Michigan, the local public library has about six months until funding runs out and it may be forced to shut down.

Last week, residents voted against passing a millage, which raises property taxes, to fund the Patmos Public Library. What could make a town turn against its own library? Homophobic and hateful rhetoric — specifically, the false idea that kids books with LGBTQ characters are secretly about pornography or being used to abuse children, which has exploded in the conservative worldview over the last year.

“50% millage increase to groom our kids? Vote no on library,” read one sign seen around town before voters went to the polls.

Debbie Mikula, the executive director of the Michigan Library Association, said she believes the millage didn’t pass because the library has books with LGBTQ themes. “This is a full-out campaign against the library,” she said.

Two library directors at Patmos left this spring. One said it was because of online harassment and accusations of abusing children.

The library board has less than two weeks to get the millage back on the ballot for a vote in November. If they don’t, it’s likely the library will have to shut down permanently.

The people in Jamestown are “very, very conservative,” Mikula said, “and they are holding the library hostage.”

Conservatives’ scorn for most government institutions — like schools or public health agencies — is not a new phenomenon. Consider the way right-wingers treated government officials who attempted to blunt the impact of the coronavirus pandemic. But now, perhaps emboldened by openly right-wing extremist politicians, they’ve set their sights on our public libraries.

“I have seen Republicans try to take over school boards my entire lifetime, but this is totally different,” Alison Macrina, the director of Library Freedom Project, a nonprofit organization, said about the shift to public libraries.

In the same way that parents in the ’80s and ’90s fretted about their children being swept up in a satanic cult, suburban moms are now tossing and turning at night over the horrors of books that might depict anything but conservative Christian morals.

“In the last few years, public libraries have taken a stronger stance of racial justice and queer rights and representation,” Macrina said. “This is reactive to that, certainly.”

And it’s a reaction being seen around the U.S.

A public library in Vinton, Iowa — a small town with about 5,000 residents — temporarily shut down in July after most of the staff quit because of threats against its LGBTQ members. People in the town complained that there were not enough books about former President Donald Trump, that LGBTQ books were on display, and that members of the LGBTQ community worked there, according to the Iowa Starting Line. The library reopened with an all-volunteer staff.

In Llano County, Texas, the county commission made the public library system shut down for a few days in December in order to review the books available to children and remove any deemed questionable. They specifically targeted the 850 books that GOP state Rep. Matt Kruse had personally deemed inappropriate for kids earlier that year. He said his list of books included those that “might make students feel discomfort, guilt, anguish, or any other form of psychological distress because of their race or sex.”

Suzette Baker, a librarian in the county, reportedly refused to go along. She told local reporters in March that she had been fired from her job for not removing books, including a memoir by Jazz Jennings, a transgender teen. “It is her biography of her life growing up as a transgender teenager, and obviously this group thought that was too much for their children to read,” Baker said. “No one is forcing their kids to read anything.”

Now, residents are suing the county, saying book bans are censorship and violate their First and 14th Amendment rights.

Free speech advocates have noticed that the targeting of public libraries isn’t just confined to one or two states.

“It cannot be a coincidence that multiple people around the country are getting the same message,” Jonathan Friedman, the director of free expression and education programs at PEN America, told HuffPost. “They’re taking some of that ‘stolen election’ energy and directing it towards public schools and public libraries.”

But there isn’t really a singular group leading the charge — instead different groups, including Moms for Liberty or Catholic Vote, are pushing the same narratives.

“The nature of their organizing is that the ideas are bouncing from group to group on Facebook,” Macrina said.

Moms For Liberty is a right-wing group with an unassuming name that two former school board members launched in Florida in 2021 to fight for “parental rights,” including battles against mask mandates and “critical race theory.” The group now claims to have 160 chapters in 33 states.

As Media Matters reported, Moms For Liberty is partnering with conservative groups to flood public libraries with children’s books they approve of, like an anti-trans children book or a book that paints Rush Limbaugh as hero — with no regard for how parents of LGBTQ or Black children may feel.

For Pride Month, the conservative political advocacy group Catholic Vote launched a campaign dubbed “Hide the Pride.” In June, the group encouraged parents to go to their public libraries and check out any LGBTQ or other books conservatives don’t like — to prevent other people from reading them. “Do you see rainbow-trans-BLM flags everywhere? Including in your public, taxpayer-funded spaces? We do. And we are meeting the challenge head on,” read one online flier with instructions on how to “reclaim” the library.

The group encouraged people to go to their libraries in groups and record themselves checking out the books, then posted photos online of people doing just that. The group argued its campaign was fair because parents hadn’t been consulted before these books were put in their libraries.

The obvious solution for these parents is to just not allow their own children to read about LGBTQ issues or racial justice. But that’s not really why they’re targeting libraries.

“They’re not interested in compromising,” Friedman said. “Their aim is to shut them down and stop them entirely.”

There’s a long tradition of book-banning in the U.S. In the 1980s, the Moral Majority, the group founded by Jerry Falwell, was leading the charge in book banning. Thanks to the election of Ronald Reagan, Christian evangelicals’ influence was growing in public life — and they objected to any books that didn’t reflect their beliefs back at them.

But while the movements have echoes of each other, the new effort to ban books has definitely changed.

The right-wing culture warriors also have the support of elected officials. As they began their crusade, laws about book banning began showing up in state legislatures.

“I’ve never seen that kind of effort to change laws,” Macrina said. “You’re seeing that down to the really micro level now.”