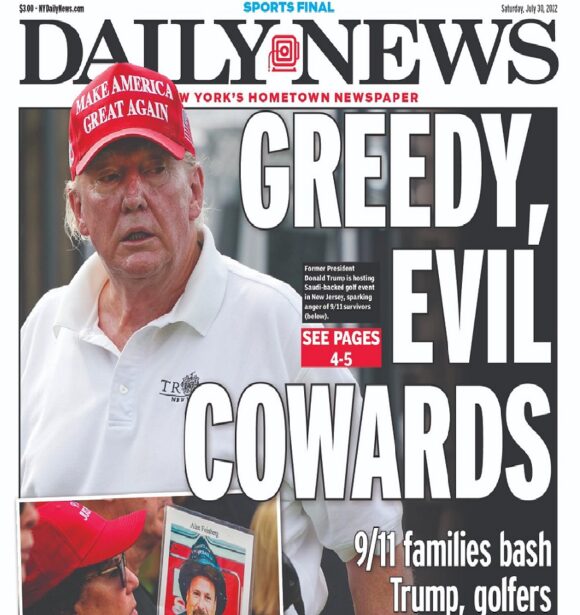 A tearful group of protesters stood between two American flags behind a public library, in stark contrast to the festivities at a golf tournament three miles down the road at Donald Trump’s Bedminster, New Jersey golf course.

The group, a band of family members of victims of the 9/11 terrorist attacks, spoke vehemently against the Saudi-backed LIV Golf tournament being held this weekend at the club owned by the former president.

The group, 9/11 Justice, seeks to bring Saudi Arabian government officials, whom they assert supported the terrorists, to judgment. They are infuriated that Trump once agreed that the Saudi government was responsible, but has changed his tune, they said, to cash in on Saudi efforts to sanitize the nation’s global image through sports.  As reported by the Daily News and The New York Times.

“How much money does it take to turn your back on your country, on the American people?” said Juliette Scauso, who was 4 years old when her father, the firefighter Dennis Scauso, perished in the attacks.

For days, the LIV golfers and Trump have defended their decisions to align with the breakaway tour and accept millions of dollars from the Saudi sovereign wealth fund, which is overseen by Crown Prince Mohammed bin Salman. Critics of the tour say it is another example of the Saudis “sportswashing” atrocities attributed to them — supporting the 9/11 terrorists, killing the journalist Jamal Khashoggi and oppressing women and members of the L.G.B.T.Q. community. 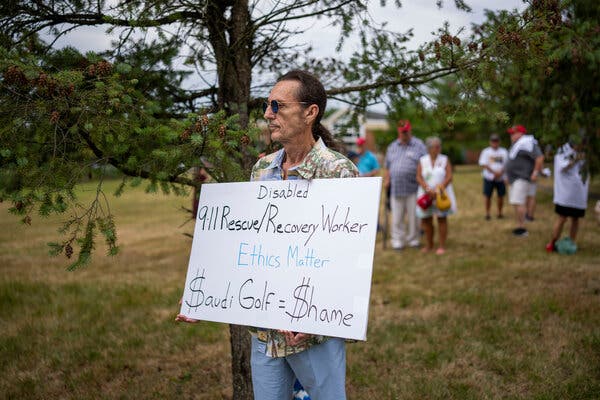 Michael Jessie, of Plainville, N.Y., was among the protesters objecting to the tournament. Credit…Doug Mills/The New York Times

Trump, who as a presidential candidate in 2016 blamed the Saudis for the 9/11 attacks, said on Thursday that “nobody’s gotten to the bottom of 9/11, unfortunately.

On Friday, the protesters had their chance to respond to both Trump and to the golfers. Many accused the golfers of cowardice for proclaiming sympathy with their cause while still accepting LIV Golf’s money.

“You are taking a stand that you agree with the actions of Saudi Arabia or, just as bad, that you are so incredibly greedy and callous that you really don’t care about these atrocities,” Scauso said.

The organizers came to the protest armed with copies of declassified F.B.I. documents, which they say establish a clear connection between 12 Saudi government officials and the terrorists in the months leading up to the attacks.

“It’s simple,” said Tim Frolich, who was in the South Tower on 9/11. “The Saudis did it. They plotted it, they funded it, and now they are trying to distract every one of those things with a golf tournament 50 miles away from ground zero. It’s deplorable.”

The group urged golf fans to boycott LIV Golf and asked golfers and anyone doing business with the Saudis, including broadcasters, to reconsider. On Friday morning, at a nearby Marriott serving as headquarters for the tour on its Bedminster stop, members of the group approached David Feherty, the former CBS and NBC golf analyst who has defected to join the tour even though it has no American broadcast television contract yet.

Brett Eagleson, the president of 9/11 Justice, asked Feherty if he would listen and perhaps speak to the golfers about the choices they are making.

“He was actually really receptive,” Eagleson said. “He was really open to working with us and having a partnership with us, as opposed to being combative. I’m hopeful.”

But Eagleson was far less conciliatory about Trump, who he said was more culpable than the golfers, because, as the former commander in chief, he should know better. Eagleson was part of a group that met with Trump at the White House on Sept. 11, 2019. They say Trump urged them to continue their work, which they did with vigor on Friday

Eagleson said Trump’s claim that “nobody’s gotten to the bottom of 9/11” outraged the family members of victims beyond their already simmering anger.

“Our loved ones are the heroes,” he said, “and the golfers and the former president are cowards.”

As the protesters spoke, several passing cars honked horns in support, but a few drivers yelled out in support of Trump and one yelled at the family members to go home.

Winuk, whose brother, Glenn Winuk, a volunteer firefighter, died in the attacks, called the Saudi funds “blood money” and warned that anyone taking it would carry the “stench” of it forever.