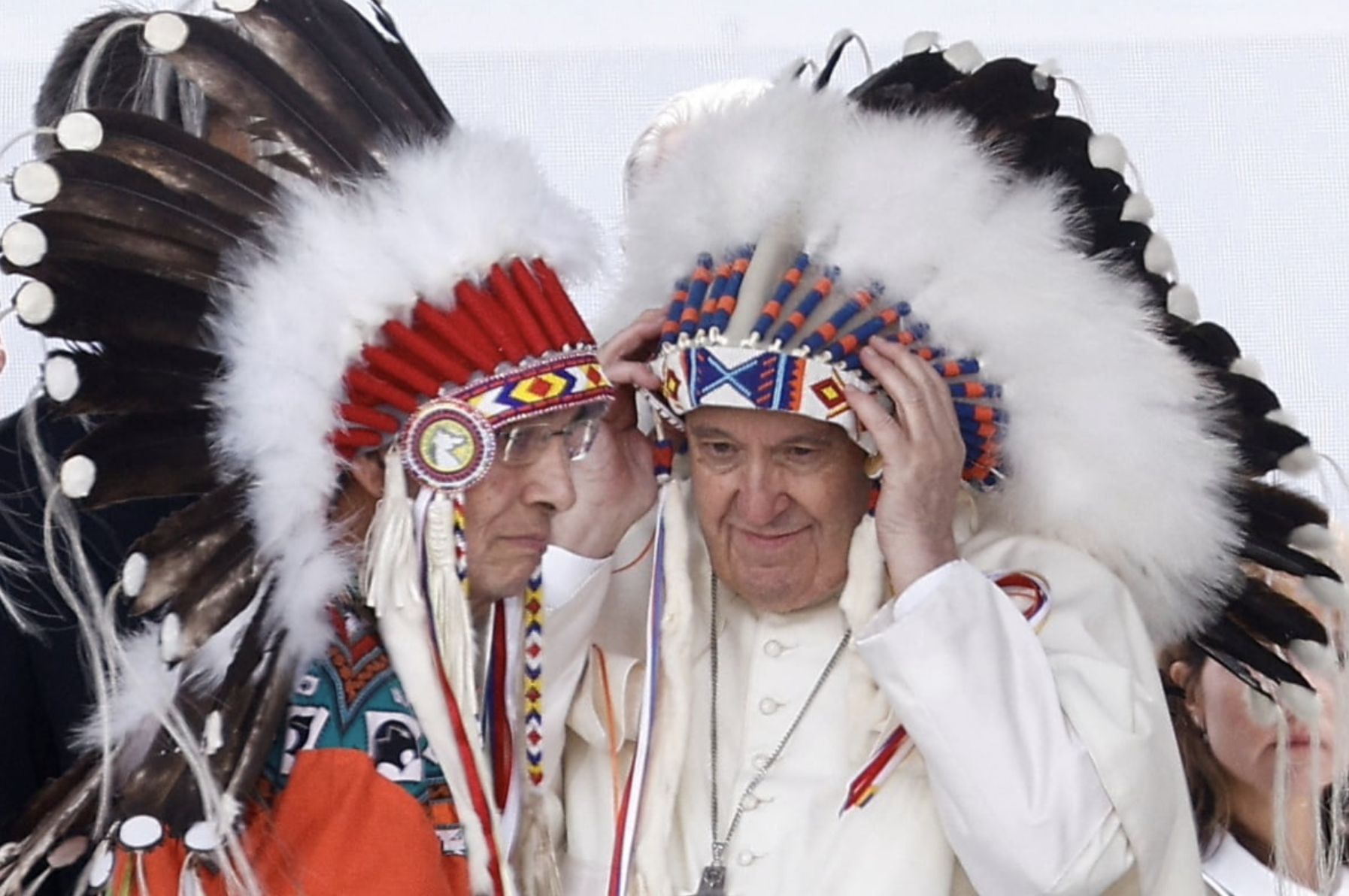 “I am deeply sorry,” Francis said to applause from school survivors and Indigenous community members gathered at a former residential school south of Edmonton, Alberta. He called the school policy a “disastrous error” that was incompatible with the Gospel and said further investigation and healing is needed.

“I humbly beg forgiveness for the evil committed by so many Christians against the Indigenous peoples,” Francis said.

In the first event of his week-long “penitential pilgrimage,” Francis traveled to the lands of four Cree nations to pray at a cemetery and then deliver the long-sought apology at nearby powwow ceremonial grounds. Four chiefs escorted the pontiff in a wheelchair to the site near the former Ermineskin Indian Residential School, and presented him with a feathered headdress after he spoke, making him an honorary leader of the community.

Francis’ words went beyond his earlier apology for the “deplorable” abuses committed by missionaries and instead took institutional responsibility for the church’s cooperation with Canada’s “catastrophic” assimilation policy, which the country’s Truth and Reconciliation Commission said amounted to a “cultural genocide.”

More than 150,000 native children in Canada were forced to attend government-funded Christian schools from the 19th century until the 1970s in an effort to isolate them from the influence of their homes and culture. The aim was to Christianize and assimilate them into mainstream society, which previous Canadian governments considered superior.

Ottawa has admitted that physical and sexual abuse was rampant at the schools, with students beaten for speaking their native languages. That legacy of that abuse and isolation from family has been cited by Indigenous leaders as a root cause of the epidemic rates of alcohol and drug addiction now on Canadian reservations.

The discoveries of hundreds of potential burial sites at former schools in the past year drew international attention to the schools in Canada and their counterparts in the United States. The revelations prompted Francis to comply with the truth commission’s call for an apology on Canadian soil; Catholic religious orders operated 66 of the country’s 139 residential schools.

Reflecting the conflicting emotions of the day, some in the crowd wept as Francis spoke, while others applauded or stayed silent listening to his words, delivered in his native Spanish with English translations. Others chose not to attend at all.

“I’ve waited 50 years for this apology, and finally today I heard it,” survivor Evelyn Korkmaz said. “Part of me is rejoiced, part of me is sad, part of me is numb.” She added, however, that she had hoped to hear a “work plan” from the pope on what he would do next to reconcile, including releasing church files on children who died at the schools.

Many in the crowd wore traditional dress, including colorful ribbon skirts and vests with Native motifs. Others donned orange shirts, which have become a symbol of school survivors, recalling the story of one woman whose beloved orange shirt, a gift from her grandmother, was confiscated at a school and replaced with a uniform.

“It’s something that is needed, not only for people to hear but for the church to be accountable,” said Sandi Harper, who traveled with her sister and a church group from Saskatchewan in honor of their late mother, who attended a residential school.

“He recognizes this road to reconciliation is going to take time, but he is really on board with us,” she said, calling the apology “genuine.”

A bit late for the Vatican but Pope Francis keeps making right decisions!