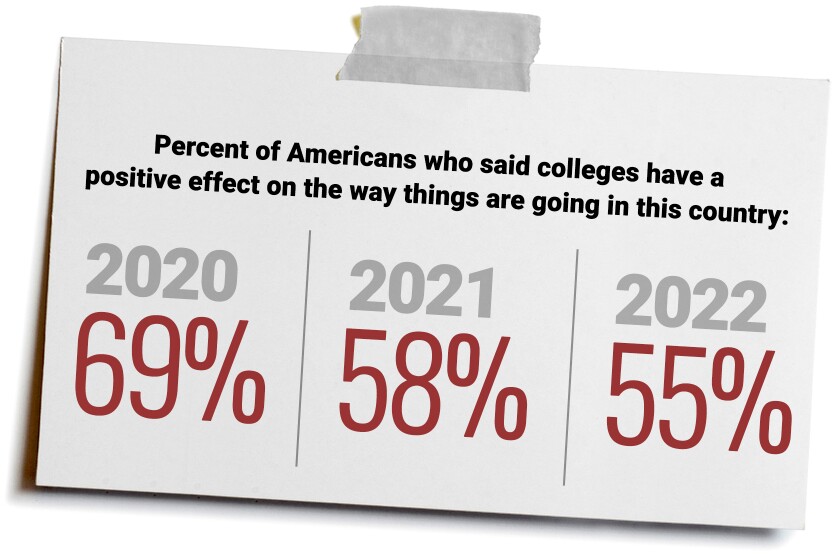 Two years ago, more than two-thirds of Americans said colleges were having a positive effect on the country, according to a survey conducted by New America. In the most recent version of the survey, barely half agreed.

As with other recent public-opinion polling, New America’s findings reveal a yawning partisan gap. While nearly three-quarters of Democrats saw higher education’s contributions in a positive light, just 37 percent of Republicans did.  As reported by The Chronicle of Higher Education.

Yet the think tank’s annual Varying Degrees survey found that a strong majority, more than 75 percent, thought that some education beyond high school offered a good return on investment for students. And public perception of online education improved markedly in the latest poll, with nearly half of Americans saying it was comparable in quality to in-person education, up from just a third in 2021.

Notably, 17 percent of current students said they thought the quality of online instruction was better than in-person teaching. Just 6 percent of non-students agreed with that perspective.

The greatly improved reputation enjoyed by online education could reflect the move to virtual and hybrid teaching during the Covid-19 pandemic and the ways in which both students and professors adjusted, according to a report on the survey findings. “I expected some shift, but I didn’t expect this substantial increase,” said Sophie Nguyen, a policy analyst with New America who is one of the report’s authors . “It is significant.”

In the report, New America raises alarms about the sudden shift, calling it “unexpected and particularly concerning from an accountability perspective,” given that many of the largest providers of online programs are for-profit colleges, some with a history of predatory practices. There are also questions about oversight as more nonprofit institutions contract with private-sector online program managers to help design and administer virtual programming, Nguyen said.

Despite the improved profile of online education, eight in 10 Americans think that the courses should cost less than those taught face-to-face.

In general, the survey found Americans are worried about college affordability. Only about half thought it was possible to get a high-quality education after high school that is also affordable. Concerns about cost are tied to age: Two-thirds of baby boomers said it was possible to find affordable postsecondary education, while 45 percent of millennials and Generation X agreed. Among Generation Z, a group that includes today’s college students and recent graduates, only 36 percent thought an affordable degree or credential was within reach.

Worries about affordability may be heightened as rising prices for gas and food elevate pocketbook concerns and inflation eats into Americans’ savings.

The New America findings echo other recent public polling on higher education. A survey released earlier this month by Public Agenda and USA Today found that only half of Americans think the economic benefits of college outweigh the costs. More than 80 percent said college expenses had made earning a degree out of reach for low-income students.

When it comes to who should pay for higher education — the government, because education is good for society, or students, because they personally benefit — a majority of respondents in the New America survey said the government should be more responsible.

The issue of college costs has been hotly debated in Washington, yet there has been little consensus on policy to improve affordability and access. Free-college efforts have stalled in Congress. The Biden administration has sought to cancel the student loans of some borrowers, such as those whose colleges defrauded them or graduates working in public-service jobs. But many would like to see the president follow through on a campaign promise and enact blanket loan forgiveness.

Still, the share of respondents who said government should be the primary funder has been shrinking in the New America survey in recent years, from 63 percent in 2020 to 58 percent in the new survey. And the partisan divide on the issue is deep and broad: More than three-quarters of Democrats agree that paying for college should be the responsibility of the government, whether at the state or federal level. By contrast, 63 percent of Republicans think students should mostly foot the bill, since a degree will help them individually get ahead.

Democrats are also more likely than Republicans to think that higher education is underfunded across all sectors, including community colleges, minority-serving institutions, and four-year public universities.

Nguyen points out that partisan differences are not unique to higher education: Republicans and Democrats are also divided on high-profile issues such as the economy, the environment, and gun control. Partisanship can make agreement on policy solutions seem elusive. “We haven’t bridged the gap,” Nguyen said.

One area where all sides agree: accountability. Strong majorities of Americans agree that colleges should lose some access to government funding if they have low graduation rates, low rates of graduates earning a living wage, or graduates with high rates of student-loan debt relative to their earnings.

For the first time, the six-year-old Varying Degrees survey asked respondents about test-optional admissions, as many colleges dropped standardized-test requirements for applicants amid the pandemic. While responses were mixed, there were clear divides by race and age: Higher proportions of Black and Latina/o respondents favored test-optional policies than those who were white or Asian. The youngest respondents were significantly more likely to favor doing away with requirements for applicants to submit SAT or ACT scores. Sixty percent of those in Gen Z supported test-optional policies. About 45 percent of Gen X and millennial respondents were in favor of test-optional admissions, while only a third of baby boomers agreed.

The survey is based on nearly 2,200 online and telephone interviews conducted in April and May.

Interesting results but not surprising given the loss of confidence that Americans have for most of our institutions!