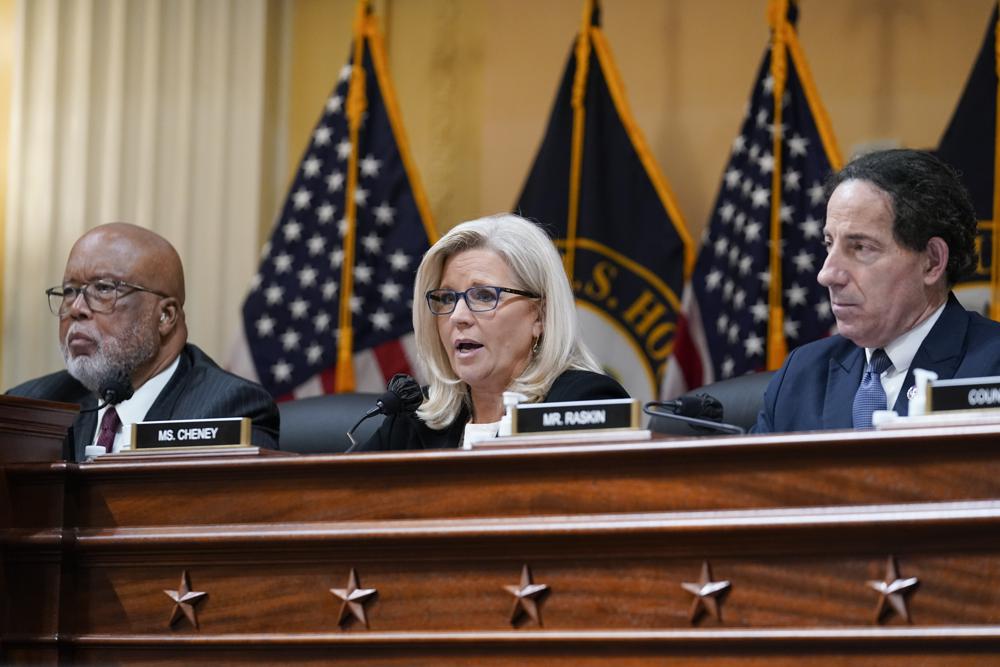 Yesterday I watched the three-hour January 6th Congressional Hearing and I could not believe President Trump’s associates and other lowlifes who were highlighted as the key actors in planning the insurrection.  The fact that Trump came to depend on the likes of Sidney Powell, Michael Flynn, and Rudy Giuliani for advice on how to proceed with his “big lie”  was disgraceful enough but to then hear the voices of the leaders of the militant, right-wing groups bent on anarchy was too much to bear.

A presidential tweet that some saw as a “call to arms.” An “unhinged” meeting in the White House. Violent extremists planning to storm the Capitol as President Donald Trump pushed lies about election fraud.

At its seventh hearing, the House Jan. 6 panel on Tuesday showed further evidence that Trump was told, repeatedly, that his claims of fraud were false — but that he continued to push them anyway. And at the same time, he turned to the widest possible audience on Twitter, calling his supporters, some of them violent, to Washington on Jan. 6, 2021, to not only protest but “be wild” as Congress certified President Joe Biden’s victory.

Below are takeaways courtesy of the Associated Press.

God save America should Trump ever come close to the White House again!

A major focus of the hearing was Trump’s Dec. 19 tweet about a “big protest” at the coming joint session of Congress: “Be there, will be wild!”

Florida Rep. Stephanie Murphy, a Democratic member of the panel, said the tweet “served as a call to action and in some cases as a call to arms.” She said the president “called for backup” as he argued that Vice President Mike Pence and other Republicans didn’t have enough courage to try to block Biden’s certification as he presided over the joint session.

The tweet “electrified and galvanized” Trump’s supporters, said Maryland Rep. Jamie Raskin, another Democratic committee member, especially “the dangerous extremists in the Oath Keepers, the Proud Boys and other far-right racist and white nationalist groups spoiling for a fight.”

The committee showed a montage of videos and social media posts after the tweet as supporters reacted and planned trips to Washington, some of them using violent rhetoric and talking about killing police officers.

The committee spliced together video clips from interviews to describe a chaotic meeting on Dec. 18, in the hours before Trump’s tweet, in almost minute-to-minute fashion.

Former White House aide Cassidy Hutchinson, who testified live before the panel two weeks ago, called the meeting between White House aides and informal advisers pushing the fraud claims “unhinged” in a text that evening to another Trump aide. Other aides described “screaming” and profanity in the meeting as the advisers floated wild theories of election fraud with no evidence to back them up, and as White House lawyers aggressively pushed back.

The video clips included testimony from lawyer Sidney Powell, who had pushed some of the wildest theories, including of breached voting machines and hacked thermostats that she somehow tied to the false claims of fraud.

White House lawyer Eric Herschmann, one of the aides who pushed back, said the theories were “nuts” and “it got to the point where the screaming was completely, completely out there.”

The aides described a chaotic six hours of back and forth, starting with Trump talking to a group of the informal advisers with no White House aides present. Both Pat Cipollone, the White House counsel, and Powell said in interviews that Cipollone rushed in to disrupt the gathering. Powell said sarcastically that she thought Cipollone set a new “ground speed record” getting there.

Cipollone, who sat with the committee for a private interview last week after a subpoena, said he didn’t think the group was giving Trump good advice and said he and the other White House lawyers just kept asking them, “where is the evidence?” But they did not receive any good answers, he said.

Hours later, at 1:42 a.m., Trump sent the tweet urging supporters to come to Washington on Jan. 6.

A RIOTER, AND A FORMER OATH KEEPER

Two witnesses were in the hearing room for testimony — a rioter who has pleaded guilty to entering the Capitol and a former Oath Keeper who described his experiences with the group.

Stephen Ayres, who pleaded guilty last month to a misdemeanor count of disorderly conduct and is scheduled to be sentenced in September, said he was in Washington on Jan. 6 at the behest of Trump, and that he left the Capitol when Trump — after several hours — told them in a tweet to leave. “Basically we were just following what the president said,” Ayres said.

He said his arrest less than a month later “changed my life, not for the better” and it makes him angry that he hung on Trump’s every word, and that some people are still doing that. Asked by Wyoming Rep. Liz Cheney if he still believes the election was stolen, Ayres said, “Not so much now.”

Jason Van Tatenhove, a former ally of Oath Keepers leader Stewart Rhodes who left the group years before the insurrection, said the group is a “violent militia.”

“I think we need to quit mincing words and just talk about truths and what it was going to be was an armed revolution,” he said. “I mean, people died that day … This could have been the spark that started a new civil war.”

Rhodes and other members of the Oath Keepers, along with another far-right group, the Proud Boys, have been charged with seditious conspiracy in the most serious cases the Justice Department has brought so far in the Jan. 6 attack.

INSIDE THE WHITE HOUSE

The committee revealed that Trump planned for days to have his supporters march to the Capitol — and that he would join them.

The panel showed a draft tweet, undated and never sent, that said “Please arrive early, massive crowds expected. March to the Capitol after. Stop the Steal!” And they showed texts and email exchanges between planners and White House aides about a secret plan for the march.

“This stays only between us, we are having a second stage at the Supreme Court” after Trump’s rally, wrote one of the rally’s organizers, Kylie Kremer, to a Trump confidant. “POTUS is going to have us march there/the Capitol.” People will try to “sabotage” it if they found out, she said.

Murphy said the president’s call for the march at his rally was “not a spontaneous call to action, but rather was a deliberate strategy decided upon, in advance, by the president.”

Hutchinson’s testimony last month also focused on Trump’s desire to march with the protesters, and his anger at security officials who would not let him go.

The committee examined Trump’s speech at the rally that morning and some of his ad-libs about Vice President Mike Pence that were not in the original drafts of the speech. In the end, he would mention the vice president eight times, telling the crowd that he hoped Pence would “do the right thing” and try and block Biden’s certification at the joint session of Congress.

As they have at several hearings, the committee lawmakers showed video testimony from White House aides who said they did not believe there was widespread fraud in the election and had told the president that. Several aides said they were firmly convinced Biden’s victory was a done deal after the states certified the electors on Dec. 14 and after dozens of Trump’s campaign lawsuits failed in court.

Ivanka Trump, the former president’s daughter, said it was her sentiment that the election was over after Dec. 14 and “probably prior as well.” Former White House Press Secretary Kayleigh McEnany said she planned for life after the White House at that point. Eugene Scalia, Trump’s labor secretary, said he told the president in a call that it was time to say that Biden had won.

And there were regrets afterward. In one text exchange revealed by the panel, former Trump campaign aide Brad Parscale wrote to aide Katrina Pierson: “This week I feel guilty for helping him win,” and “If I was Trump and knew my rhetoric killed someone.”

“It wasn’t the rhetoric,” Pierson responded.

“Katrina,” wrote Parscale, who still participates in a weekly strategy call with Trump aides. “Yes it was.”

At the end of the hearing, Cheney revealed some new information: Trump had tried to call a future witness, and the committee had alerted the Justice Department about the call.

The witness did not take the call, according to Cheney. She did not identify the witness but said it was someone the public has not yet heard from.

The committee has previously said that people in Trump’s orbit have contacted witnesses in ways that could reflect or at least create the appearance of inappropriate influence.