A toddler found at the scene of the July Fourth shooting in Highland Park, Illinois, was left orphaned in the attack.

His parents — Irina McCarthy, 35, and Kevin McCarthy, 37 — were among the seven people killed by a gunman during the town’s July Fourth parade. Members of the community worked together to care for the child in the aftermath and reunite him with his grandparents, according to multiple news reports and an online fundraiser.  Their son, Aiden,  was reportedly physically unharmed. 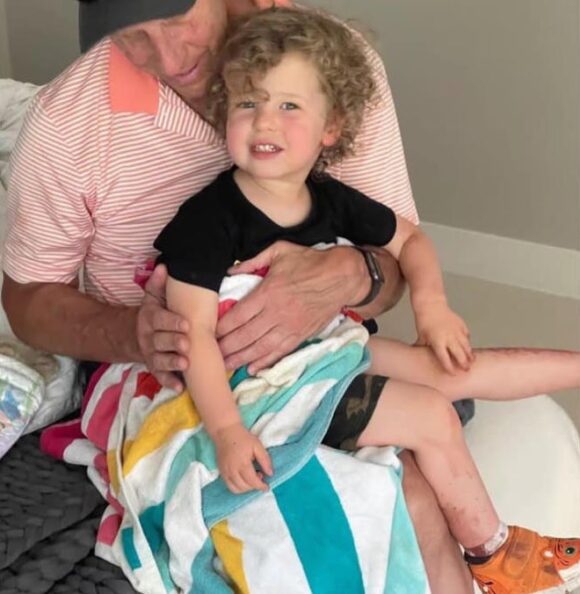 In the wake of the shooting, locals posted pictures of the boy with blood stains on his clothes on Facebook, asking if anyone recognized him or knew his parents.

A neighbor of the deceased couple, Adrienne Rosenblatt, told The New York Times that she recognized their son in an online notice and showed the notice to his grandparents, who retrieved the child from the police station.

Several people told the media they had been involved in caring for an unnamed toddler who was found at the shooting.

Lauren Silva, who was out for breakfast near the parade route, told The Daily Beast her boyfriend found a boy lying underneath his father, who had been shot in the leg.

“They were trying to stop the bleeding so I brought the boy downstairs into the garage,” she said.

Silva said the boy’s father died, and, after hiding in the garage with the child, she and her boyfriend handed him off to another couple. She said he was later reunited with his grandparents.

“He kept asking if Mom and Dad are going to come back soon,” she recalled.

Greg and Dana Ring, who were at the parade, told WGN-TV that as they were fleeing the gunfire, they saw a woman carrying a young boy covered in blood.

Multiple current and former members of the community shared a link to a GoFundMe page for the family, including Angela Vella and journalist Rachel Handler, who said they had gone to middle school with Irina McCarthy.

“It is with incredible sadness that I am making this post. My dear friend [Irina] (formally Levburg) McCarthy and her husband were killed in the shooting,” Vella wrote on Facebook.

“My stomach is in knots. I can’t believe this has happened. Irina was such a fun person with a genuine soul,” she added.

The fundraiser’s organizer, Irina Colon, is a relative of Irina McCarthy, according to CNN. She said Aiden will now be raised by family members.

“At two years old, Aiden is left in the unthinkable position; to grow up without his parents,” the campaign said. “Aiden will be cared for by his loving family and he will have a long road ahead to heal, find stability, and ultimately navigate life as an orphan. He is surrounded by a community of friends and extended family that will embrace him with love, and any means available to ensure he has everything he needs as he grows.”

The fundraiser had raised nearly $1.3 million by Tuesday evening.