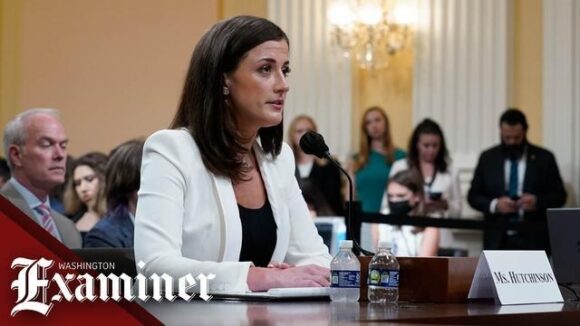 The Washington Examiner, a conservative news website and weekly magazine, published a blistering editorial in the wake of bombshell testimony from the Jan. 6 committee hearings.

Former President Donald Trump is a “disgrace” who is “unfit to be anywhere near power ever again” says the editorial.

Cassidy Hutchinson, an aide to Mark Meadows while he was Trump’s White House chief of staff, gave jaw-dropping testimony Tuesday that indicated Trump knew his supporters were armed and potentially violent but encouraged them to help him overthrow the 2020 election anyway. She also testified that a Secret Service agent told her that Trump tried to grab the wheel of his armored limousine to turn back to the Capitol when the Secret Service informed him they’d be unable to take him there on Jan. 6.

The Examiner noted that Hutchinson, at 25, had already worked at the highest levels of Republican politics, and was “a conservative Trumpist true believer and a tremendously credible one at that.”

“What Hutchinson relayed was disturbing. She gave believable accounts of White House awareness that the planned Jan. 6 rally could turn violent. She repeated testimony that Trump not only knew that then-Vice President Mike Pence’s life had been credibly threatened that day but also that he was somewhere between uncaring and actually approving of Pence’s danger,” the site said, before going on to relay other shocking elements of Hutchinson’s testimony, including his episode in the presidential motorcade and his “fits of rage” throwing food at walls.

“Hutchinson’s testimony confirmed a damning portrayal of Trump as unstable, unmoored, and absolutely heedless of his sworn duty to effectuate a peaceful transition of presidential power,” the site concluded.

“Trump is a disgrace. Republicans have far better options to lead the party in 2024. No one should think otherwise, much less support him, ever again.”