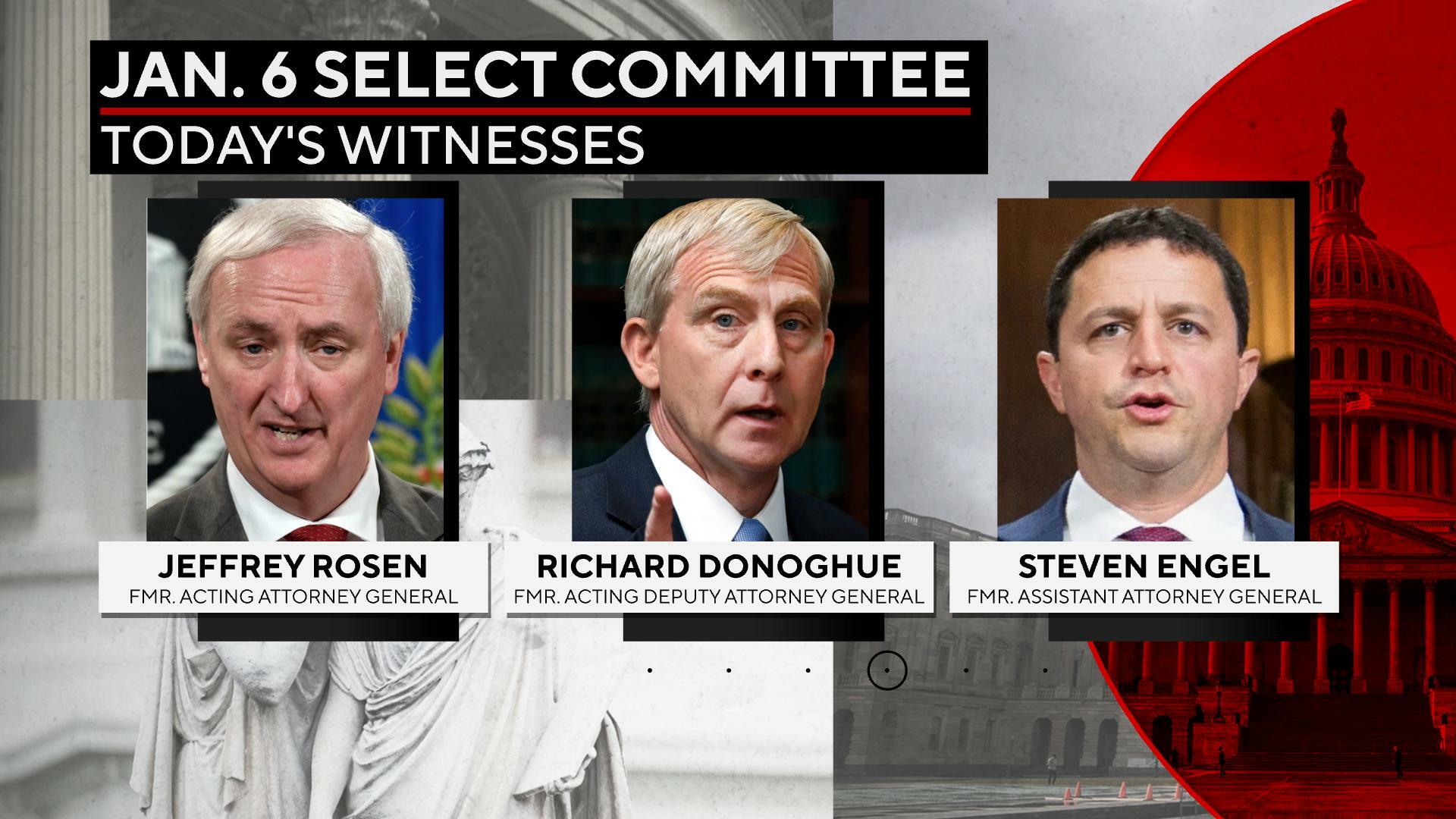 Yesterday’s House Jan. 6 committee  hearing provided incredible testimony on how Donald Trump tried to install an inexperienced  loyalist atop the Justice Department who would pursue his false claims of voter fraud and stop the certification of the 2020 election that Democrat Joe Biden won.  Jeffrey Rosen, Richard Donoghue, and Steven Engel, all high-ranking Trump appointed administrators in the Justice Department, provided critical commentary under oath at this hearing.

It’s the latest account of how perilously close the United States could have come to a constitutional crisis if the department leaders had not threatened to resign over the scheme and the defeated Trump had been able to orchestrate a plan for the U.S. government to overturn election results in several pivotal states.

Rep. Adam Kinzinger, R-Ill., led the hearing, saying it would show “how close we came to losing it all.”

The committee investigating the causes of the insurrection at the Capitol on Jan. 6, 2021, has been trying to make the case that Trump’s efforts to reverse his loss resulted in the deadly siege after he sent supporters to the Capitol as Congress was certifying Biden’s victory. Here are some important takeaways from yesterday’s  hearing courtesy of the Associated Press.

Day after day, Trump pressured the department leaders to dig into false claims of election fraud after the November 2020 election.

The department declined Trump’s overtures because “we did not think they were appropriate,” testified Jeffrey Rosen, who became acting attorney general after Barr stepped down.

Over and over, the officials explained to Trump that the states conduct their own elections, free from federal interference. They tried to show him there was no voter fraud on a scale that could have tipped the election in his favor.

Trump, however, only pressed harder and started looking for alternatives.

At point in late December 2020, Trump asked what Rosen found to be a “peculiar” question: Do you know Jeff Clark?

Trump was eyeing Clark to take over at the department.

WHO IS JEFF CLARK?

Clark led the civil division and particularly handled environmental cases. He was introduced to Trump by a Republican congressman from Pennsylvania, a leader of the House’s conservative Freedom Caucus.

Clark had been circulating a proposal that would have the legislatures from battleground states not certify their election results. It was similar to a plan from Trump lawyer John Eastman for alternative slates of electors loyal to Trump, rather than Biden, when Congress met Jan. 6, 2021, to certify results.

Clark’s ideas alarmed his colleagues, as did his sudden rise into Trump’s orbit as a potential new acting attorney general.

“It may well had spiraled us into a constitutional crisis,” testified Richard Donoghue, the former acting deputy attorney general.

TRUMP “WHAT HAVE I GOT TO LOSE?’

During a meeting at the White House days before the riot, Justice Department leaders told Trump they would resign if he tried to install Clark and put his scheme in motion to reject electors.

Trump had called the officials to an unexpected Sunday meeting to lay out his plan. Donoghue described how he was dressed inappropriately in jeans, muddy boots and an Army shirt. Trump had him sit between Rosen and Clark. The president asked Donoghue: What if I replace Rosen with Clark?

“What have I got to lose?” Trump said, as Donoghue recalled.

Donoghue told Trump that the president would have everything to lose: mass resignations at the Justice Department, starting with those arrayed before him at the meeting.

Clark would be left to run a “graveyard” at the department, one of the officials said. Trump’s plan to reject the state electors with those loyal to Trump would never work. It was a “murder-suicide pact,” as his own White House counsel told him, they testified.

Donoghue made the point that “Jeff Clark wasn’t even competent to serve as attorney general.”

When Clark shot back that he had worked on complicated civil and environmental matters, Donoghue retorted: “How about you go back to your office and we’ll call you when there’s an oil spill?”

At least five Republican members of Congress, including Rep. Scott Perry of Pennsylvania, who had connected Trump and Clark, sought pardons from the president that would shield them from criminal prosecution, according to testimony Thursday.

Perry and Reps. Andy Biggs of Arizona, Mo Brooks of Alabama, Matt Gaetz of Florida and Louie Gohmert of Texas all had been involved in efforts to reject the electoral tally or submit “fake electors.” All sought pardons, according to Cassidy Hutchinson, an aide to Trump’s chief of staff, Mark Meadows. Hutchinson testified previously in video shown at the hearing.

Blanket pardons for all those involved in Jan. 6 were also discussed, according to another White House aide, John McEntee.

Gaetz tweeted that the hearing is a “political sideshow.”

Kinzinger said the only reason to ask for a pardon “is if you think you’ve committed a crime.”

Excellent hearing and an example of our government doing right by the people!