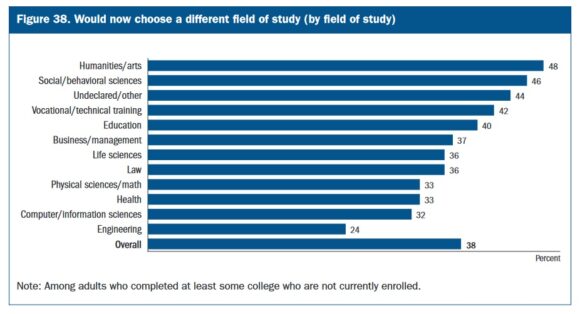 The Chronicle of Higher Education had a brief article on a new report from the Federal Reserve Board, released last Monday.  The report, “Economic Well-Being of U.S. Households in 2021,” details the findings of a survey that was conducted in October and November of 2021. Among the education issues respondents were asked about were online education, the value of college, and student debt.

An executive summary of education-related results was as follows:

Education
At the time of the survey, most parents of primary or secondary school students reported that their children were attending classes completely in person. Most parents also said that their child was doing better academically compared with a year earlier. In contrast to the experience of K–12 students, online education remained prevalent at higher education institutions in the fall of 2021.

Student Loans
The share of student loan borrowers who were behind on their payments in the fall of 2021 declined relative to before the pandemic. These borrowers also saw increases in their financial well-being compared with prior years.

One of the more interesting responses was to a question asking adults who had completed at least some college whether they would have chosen a different major (see  chart above).  Overall, 38% would have majored in another area. Nearly half (48%) who had studied the arts and humanities said they would now major in something else.

The entire report has some interesting findings!