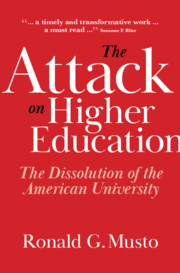 I just finished reading  The Attack on Higher Education:  The Dissolution of the American University by Ronald G. Musto. Musto is an Honorary Research Fellow at the University of Bristol and the co-author of The Digital Humanities.   His aim in writing The Attack on Higher Education was to examine the current plight of higher education including budget cuts, attacks on liberal arts and humanities, technology displacement,  and campus closings and compare it Henry VIII’s dissolution of the British monasteries in 1530s.  The comparison is a bit of a stretch but makes for an interesting read.  The beginning and ending chapters are very good. He meanders a bit in the middle and the connection to monasteries weakens.

One of the best parts in the book is where Musto discusses the future and quotes Michael Crow, the president of Arizona State University, when asked about the future of higher education, stated:

“Only through massive application of new technologies can the academy both keep up with worldwide trends and maintain its record of excellence.   This is accomplished by embracing the breakthroughs of the digital era and through active collaboration “with leading venture capitalists and investment advisors to source, fund, pilot, and credential higher education technology companies?”

I just used this exact quote in a talk on The Great American Education-Industrial Complex which I will be giving that will be part of a panel presentation at a conference in Remscheid, Germany in June.

Below is a blurb taken from the inside cover of Musto’s book.

The Attack on Higher Education by Ronald G. Musto

American higher education is under attack today as never before. A growing right-wing narrative portrays academia as corrupt, irrelevant, costly, and dangerous to both students and the nation. Budget cuts, attacks on liberal arts and humanities disciplines, faculty layoffs and retrenchments, technology displacements, corporatization, and campus closings have accelerated over the past decade. In this timely volume, Ronald Musto draws on historical precedent – Henry VIII’s dissolution of British monasteries in the 1530s – for his study of the current threats to American higher education. He shows how a triad of forces – authority, separateness, and innovation – enabled monasteries to succeed, and then suddenly and unexpectedly to fail. Musto applies this analogy to contemporary academia. Despite higher education’s vital centrality to American culture and economy, a powerful, anti-liberal narrative is severely damaging its reputation among parents, voters, and politicians. Musto offers a comprehensive account of this narrative from the mid-twentieth century to the present, as well as a new set of arguments to counter criticisms and rebuild the image of higher education.