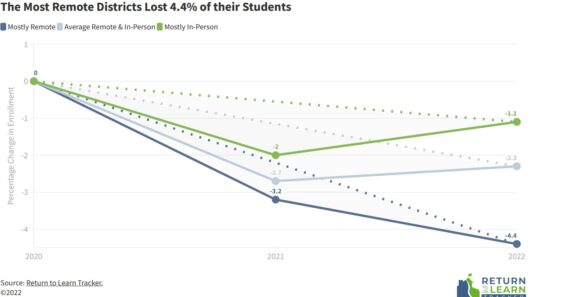 In New York City, the nation’s largest school district has lost some 50,000 students over the past two years. In Michigan, enrollment remains more than 50,000 below prepandemic levels from big cities to the rural Upper Peninsula.

In the suburbs of Orange County, Calif., where families have moved for generations to be part of the public school system, enrollment slid for the second consecutive year; statewide, more than a quarter-million public school students have dropped from California’s rolls since 2019.

And since school funding is tied to enrollment, cities that have lost many students — including Denver, Albuquerque and Oakland — are now considering combining classrooms, laying off teachers or shutting down entire schools.

All together, America’s public schools have lost at least 1.2 million students since 2020, according to a recently published national survey. State enrollment figures show no sign of a rebound to the previous national levels any time soon.  As reported by The New York Times.

A broad decline was already underway in the nation’s public school system as rates of birth and immigration have fallen, particularly in cities. But the coronavirus crisis supercharged that drop in ways that experts say will not easily be reversed.

No overriding explanation has emerged yet for the widespread drop-off. But experts point to two potential causes: Some parents became so fed up with remote instruction or mask mandates that they started home-schooling their children or sending them to private or parochial schools that largely remained open during the pandemic. And other families were thrown into such turmoil by pandemic-related job losses, homelessness and school closures that their children simply dropped out.

“This has been a seismic hit to public education,” said Marguerite Roza, director of the Edunomics Lab at Georgetown University. “Student outcomes are low. Habits have been broken. School finances are really shaken. We shouldn’t think that this is going to be like a rubber band that bounces back to where it was before.”

There are roughly 50 million students in the United States public school system.

In large urban districts, the drop-off has been particularly acute. The Los Angeles Unified School District’s noncharter schools lost some 43,000 students over the past two school years. Enrollment in the Chicago schools has dropped by about 25,000 in that time frame.

But suburban and rural schools have not been immune.

In the suburbs of Kansas City, the school district of Olathe, Kan., lost more than 1,000 of its 33,000 or so students in 2020, as families relocated and shifted to private schools or home-schooling; only about half of them came back this school year.

In rural Woodbury County, Iowa, south of Sioux City, enrollment in the Westwood Community School District fell by more than 5 percent during the last two years, to 522 students from 552, in spite of a small influx from cities during the pandemic, the superintendent, Jay Lutt, said. Now, in addition to demographic trends that have long eroded the size of rural Iowa’s school populations, diminishing funding, the district is grappling with inflation as the price of fuel for school buses has soared, Mr. Lutt said.

In some states where schools eschewed remote instruction — Florida, for instance — enrollment has not only rebounded, but remains robust. An analysis by the American Enterprise Institute, a right-leaning think tank, concluded last month that remote instruction was a major driver around the country, with enrollment falling most in districts most likely to have delayed their return to in-person classrooms.

At the same time, some families are leaving their local public schools not because they are abandoning the system altogether but because they have moved to other parts of the country that are more affordable.

Enrollment has surged as well in rural resort areas, driven by the relocation of tech workers and others able to work remotely, particularly after the pandemic set in.

School funding is tied directly to enrollment numbers in most states, and while federal pandemic aid has buffered school budgets so far, the Biden administration has made it clear that the relief is finite. Some districts are already bracing for budget shortfalls.

“When you lose kids, you lose money,” Ms. Roza said. “There’s no hidden piece to this puzzle. You have to close schools and lay off people. And every day you spend trying to avoid that, your kids are getting older and still not reading, and your district is spending money it’s not going to have.”

This is a potential financial disaster for our public schools especially those in large urban areas.